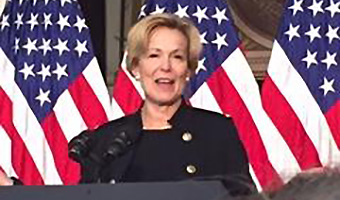 The White House took a moment to mark an important milestone in the global health arena, the 15th anniversary of PEPFAR, the President's Emergency Plan for AIDS Relief, which has saved over 17 million lives to date.

Hadassah was represented at the invitation-only event by Judith Levy, Co-Chair of the Hadassah Nurses Council, who joined more than 100 others gathered to recognize the huge strides made in HIV/AIDS prevention and treatment, thanks in part to government partnerships with faith groups and nonprofit organizations.

Held in the Library in the Executive Wing of the White House, the feeling in the room was overwhelmingly positive, said Levy, a celebration of a "win-win situation." The most positive thing, she said, "was the atmosphere. Everyone there felt it was a successful program. And that it was bipartisan."

It made one proud, she added, "that the US is doing something so positive." Joining in the celebration were policymakers, State Department representatives, ambassadors, faith leaders and those, like Levy, representing nonprofit and faith organizations that run lifesaving programs in Africa and elsewhere.

After a prayer, speakers included Vice President Mike Pence and Ambassador-at-Large Deborah L. Birx, MD, US Special Representative for Global Health Diplomacy, who spoke of the prominent role of the faith community and the history of AIDS and the United States' efforts to fight it. PEPFAR's goal is to control the epidemic and, ultimately, end the AIDS pandemic as a public health threat.