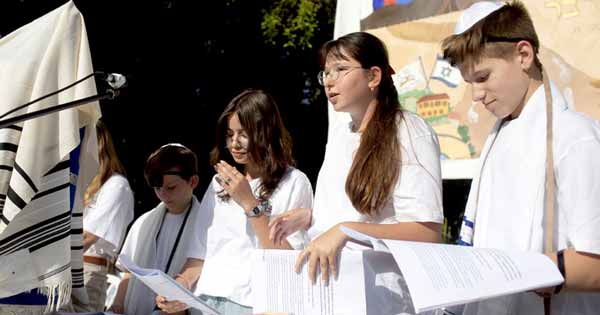 May 23 was a joyful day at Hadassah's Meir Shfeyah Youth Aliyah Village, with a special bar/bat mitzvah celebration for some 30 youth, girls and boys, part of a Shfeyah Hebrew program. The ceremony, led by Rabbi Israel and Dr. Esther Serok, a lifetime Hadassah member, included a performance by the Shfeyah's renowned Mandolin Orchestra, which included several Bedouin boys.

Hanging as a backdrop to the ceremony was an artwork created by the girls, featuring the colors of the Russian and Ukrainian flags, the mountains and the desert, with footprints leading to Jerusalem and to Meir Shfeyah. Attending the ceremony on behalf of Hadassah and the Hadassah Medical Organization were Barbara "BG" Goldstein, Audrey Shimron, Crystal Stubbs and past Hadassah National President Marcie Natan, who took time to bottle-feed a Shfeyah calf. Leading up to the ceremony, the students led Shabbat prayers, lit Shabbat candles and sang songs, proud to participate in Hadassah’s pilot program “Joy of Judaism," which teaches children about Jewish thought, tradition and practice.

Some other spring Youth Aliyah highlights: