A COVID-19 Volunteer Recalls the People She Comforted 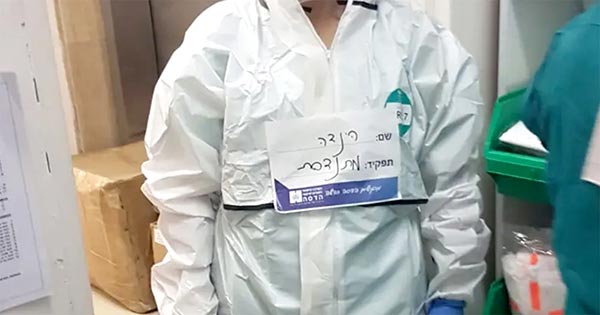 Last July, Hinda Hekelman was too sick to fast on the Jewish holiday of Tishah B’av, commemorating the destruction of the ancient Jewish temples. She was too weak from the ravages of COVID-19.

From the moment she knew she had COVID-19, Hinda was determined to volunteer in a COVID-19 outbreak unit at Hadassah Hospital Ein Kerem as soon as she recovered. She’d heard that such a volunteer program—the first in the world—had been initiated at Hadassah.

Hinda had lost her sister two years earlier to cancer, and, she says, “I saw how important it was for us to be by her side. A hospital can be so lonely.”

Two months later, Hinda felt well enough to volunteer. Her husband, Chaim, a gourmet kosher caterer whose business was closed because of the pandemic, decided to volunteer, too.

Hinda contacted religious volunteer coordinator Nurit Shatz, who directed her to the volunteer orientation program. By October, she and Chaim were coming to Hadassah three times a week, each donning the cumbersome protective suits and entering the COVID-19 unit to provide comfort and conversation to the patients.

Hinda formed a special bond with some of those patients, particularly one named Yehoshua, a critically ill older man.

“Something drew me into his room,” relates Hinda. ”I saw his vital signs looked very bad. I called a nurse named Abigail. She told me gently that this patient was approaching the end of his life. She and I recited psalms.”

Hinda also requested a prayer book and read the prayer of final reconciliation to Yehoshua. Yehoshua passed away but that was not the end of the story. Read the full article by Barbara Sofer in the July 15 issue of The Jerusalem Post.