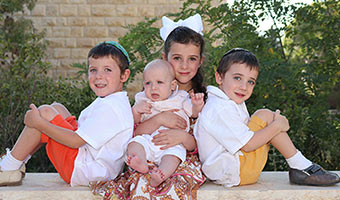 Like most Chabad Hassidic young couples, sabras Mushka and Rabbi Raphael Brod dreamt of having a large family. Joyfully, Mushka became pregnant soon after they wed. A problem turned up in her routine blood tests. Mushka learned that she was Rh-negative, lacking an Rh protein at the surface of her blood cells. In this condition, when the mother’s negative blood mixes with the fetus’s Rh-positive blood, the mother’s immune system will dispatch antibodies to destroy the fetus’s blood cells, making the baby anemic to the point of possible brain damage.

Problems usually don’t occur during an Rh-negative woman’s first pregnancy, because her body doesn’t have a chance to develop a lot of antibodies. But if preventive treatment isn’t given during the first pregnancy and the woman later gets pregnant with an Rh-positive fetus, antibodies put the next baby at risk.

Baby Racheli was born beautiful and healthy. Unfortunately, Brod didn’t receive the medication to prevent antibodies, as she would have if she had given birth at Hadassah Hospital Ein Kerem or Hadassah Hospital Mount Scopus. A year later, the young mom was pregnant again. Her local obstetrician told her not to worry—her blood was Rh positive this time.

“I know it sounds ridiculous now,” said Brod. “But I was a young mother, and here was an obstetrician assuring me that all was okay. Little did I know that I could have lost the baby, or the baby could have been born with brain damage.”

Twenty-one weeks into her pregnancy, she changed doctors. The new doctor suggested that she consult an expert, Hadassah’s Chief of Obstetrics Prof. Simcha Yagel. Prof. Yagel promised to take her through this pregnancy, even if the fetus needed transfusions in the womb. “It was scary each time having a needle through my belly to the baby, but I knew this was the only chance my baby had,” said Brod. “I must have been at Hadassah 40 times during the pregnancy.” Prof. Yagel explains, “In pregnancies like Mushka’s, we monitor the baby via ultrasound. When we see the mother’s antibodies attacking the baby’s blood vessels, we perform a blood transfusion through the umbilical cord.” Mendy was born healthy at week 38.

Dovi, baby number four born in April, required five blood transfusions while in utero. All of Brod’s future pregnancies will require monitoring and blood transfusions. “I can’t have kids without Hadassah,” said Brod. “I know I am in good hands with Prof. Yagel. At this point he’s like another father or grandfather figure in the family. I am grateful to live in 2018 when modern medicine at Hadassah enables me to have these beautiful children.”