A New Startling Record: 52 Dangerous Balls Swallowed by a Toddler 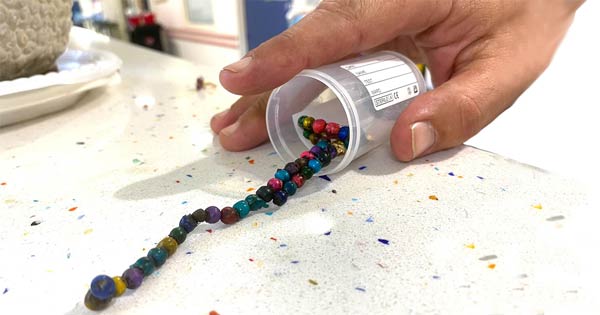 A 15-month-old toddler was playing a magnetic ball game with his older siblings. Without the older children noticing, he ingested 52 of the balls, setting a new record in Israel for babies swallowing these colorful but dangerous toys. Fortunately, Hadassah Hospital Ein Kerem’s gastroenterologists were able to remove all the balls from his stomach before they punctured the toddler’s internal organs and threatened his life.

The balls, which are magnetically attracted to one another, can cause perforations, intestinal blockages, infection, blood poisoning and death.

The parents had become alarmed when the baby spiked a fever that rose and fell over the course of a few days. The toddler had also pointed to his stomach and said that it hurt. "He does not tend to put things in his mouth," related the father, "and, even if he does, he immediately takes them out and gives them to us." But not this time.

When the parents arrived at Hadassah with the baby, Dr. Zev Davidovics, a senior pediatric gastroenterologist, was waiting for them. He had already received a phone call from the parents’ neighborhood clinic, informing him that a foreign body was lodged in the baby’s stomach that was occupying a very large space and causing the baby pain.

"We were in shock," the father said. "We remembered that our kids were playing with magnetic balls a few weeks ago. Since then we removed the game from our house. We would never have imagined that it would reach such a state where our son swallowed 52 balls, each one stuck in his little body."

Dr. Davidovich explained that some of the balls were attached to one another, while others were lodged individually within the stomach. With the child anesthetized, he said, he and his team were able to slowly and gently remove the beads to avoid an esophageal injury.

Fortunately, after a few days of hospitalization, the child’s condition was much improved. "This magnetic ball game is dangerous," the father warns, "and could lead to a disaster. It is entirely our responsibility as parents to keep this magnetic ballgame from our children."