After Years of Unidentified Pain, Teenager Finds Relief at Hadassah 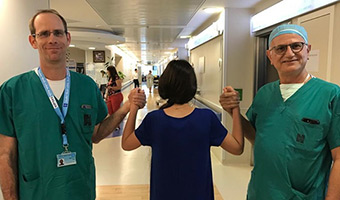 A very active, athletic 17-year-old girl arrived at Hadassah Hospital Ein Kerem complaining of pain in her stomach. She had no idea there was a massive growth in her abdomen that weighed more than six pounds.

“Tamar [not her real name] complained of abdominal pain from an early age,” her mother reports. “We contacted several doctors who did a variety of tests, but the results suggested everything was normal, and we thought all was okay. We attributed the pain to the stresses caused by life changes, such as moving our home, school examinations, and an unbalanced diet.”

One day toward evening, Tamar's mother recalls, “Tamar began complaining of strong abdominal pain. Something about the pain was different this time. She was really suffering, and her abdomen had suddenly swelled up. Tamar is a very thin girl and physically quite small. We were alarmed by the swelling. It was clear that a comprehensive examination was needed.”

Senior surgeon Dr. Uri Dior, an expert in gynecologic laparoscopic surgery, explains, “In the initial examination, we found a lump and needed to ascertain its source. During testing we discovered that the growth stretched from the pelvic area to the liver, which is most unusual. From our tests, we were confident the tumor was benign, but we couldn’t be certain. It was obvious we would have to operate on Tamar immediately.”

Hadassah’s medical specialists decided that, despite the abnormal size of the tumor, they would try to remove it using a minimally invasive laparoscopic approach to avoid a large abdominal incision. As the surgeons, Dr. Dior and Dr. Avi Ben-Shushan, director of Hadassah’s Gynecologic Oncology Service, explain, “Laparoscopic surgery means a far shorter hospitalization, much faster recovery, significantly less post-operative pain, and lower risk of infection and other complications. And, of course, the cosmetic result is significantly different. Rather than a large scar, there are tiny scars that often become invisible.”

The surgeons add, “Time and again we see the value of the minimally invasive procedure. In Tamar’s case, where a dynamic young girl’s life plans were turned upside down in an instant, we didn’t want the surgery to add to the trauma she had already experienced.”

The tumor, as expected, was benign. It is a common type of tumor among fertile women, the doctors note, but its enormity at such a young age was most unusual. "Nearly three liters of fluid and tissue were sucked out of the tumor,” Dr. Ben-Shushan says. “Since the source of the tumor was ovarian,” he explains, “it was very important for us to preserve Tamar’s ovarian tissue. At the end of the surgery, we reconstructed her ovary.  We expect her to have a fully functioning ovary.”

Three days later, Tamar was discharged from the hospital.