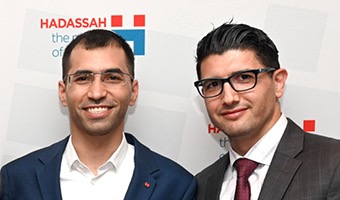 In an astonishing confluence that probably could only have happened in the troubled Middle East, an Arab Muslim surgeon at Jerusalem’s Hadassah Hospital, using illustrations from an anatomy textbook written by a Nazi professor from Vienna, operated on a Jewish patient injured in a terrorist attack.

Dvir Musai was 13 when he was gravely wounded by a mine planted by Palestinian militants. Since then he has undergone numerous surgeries. Now 31 and married with two children, Musai turned back to the doctors seeking relief from unrelenting pain in his foot. Relying on detailed nerve illustrations from the Nazi-era textbook, Dr. Madi El-Haj, a nerve surgeon, performed the successful surgery, forging an ongoing friendship between two families, one Arab, the other Jewish.

Read the complete story here.
In Israel, Modern Medicine Grapples With Ghosts of the Third Reich