At the US Supreme Court: A Special Moment for Hadassah Attorneys 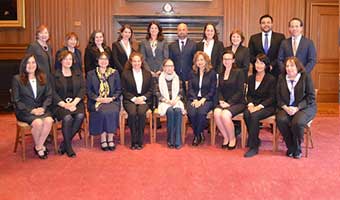 Each year, an intimate group of Hadassah members and Associates gathers at the Supreme Court for what is, for most, a professional highlight: being sworn in as Members of the Bar of the Supreme Court of the United States, alongside their peers from the Hadassah Attorneys Council. And every year, the excitement is palpable.

Unlike in years past, though, a question mark hung over the lead-up to this year's swearing in. Would Justice Ruth Bader Ginsburg — herself a lifetime member of Hadassah — be back on the Bench after having two cancerous nodules removed from her left lung in late December?

As it turned out, the answer was yes — Justice Ginsburg's first day back on the Bench coincided perfectly with the swearing-in. The whole building was abuzz, adding a special spark to the day's proceedings. This was especially so for the 12 attorneys who had come to Washington for the swearing-in from around the country, including California, Massachusetts, and Pennsylvania, joined by Deborah Kahn, Tema Sternberg and Lynn Altshuler, Supreme Court Swearing-In Co-Team Leaders, under the auspices of the Hadassah National Attorneys Council.

The Attorneys Council launched the program more than 20 years ago, but it has been all-volunteer run since 2011, says Kahn, and she and many others thought this last one was "the best program yet."

For participants, it's a full day, arriving at the Supreme Court by 7:30 am, stopping to see the ground-floor portrait of Justice Louis D. Brandeis, which Hadassah presented to the Supreme Court in 1946. Justice Ginsburg stopped by to offer her congratulations to the newest members of the U.S. Supreme Court Bar. Her smile, says Kahn, was infectious as always. Justice Stephen Breyer joined the group during breakfast, sharing insights about life on the bench and building a light-hearted rapport as he candidly fielded questions from Hadassah members.

The swearing-in itself, the 21st for Hadassah, takes place before all nine justices of the Supreme Court, and is followed by oral arguments, providing a front row seat to the proceedings of the nation's highest court.

Afterwards, during lunch, Pamela Talkin shared her insider's perspective as the 10th Supreme Court Marshal — and the first woman to hold this role. Later, participants enjoyed a behind-the-scenes tour of the huge, breathtaking Supreme Court Library.

The night before the day at the High Court, the Hadassah participants enjoyed a kick-off dinner, featuring Alliance for Justice founder and president Nan Aron, a Hadassah ally, who spoke about the composition of the current court, vetting processes for federal judiciary members, and much more.

The Hadassah Attorneys Council connects attorneys nationally and locally while working closely with Hadassah's advocacy initiatives. The council enables lawyers to meet, network and discuss legal and social issues that relate to their careers and the Jewish community while promoting Hadassah's mission. In addition to the Supreme Court Swearing-In Program, national council efforts include the Amicus Brief Program, which since its founding 40 years ago, has played a key role in Hadassah signing onto more than 125 amicus briefs, including seven in 2018, on cases tied to sexual discrimination and harassment, women's health, and religion-state separation.

This year, said Kahn, "everything went off seamlessly. It's getting better every year." She noted how pleased the Hadassah Swearing-In Co-Team Chairs were to receive a moving thank-you note from Justice Ginsburg herself. "I love the program from the bottom of my heart," said Kahn. "It's the thing that I do that gets me the highest and most enthusiastic. It takes me at least three days to come down from Supreme Court Cloud 9."