Book Review: ALL THE RIVERS 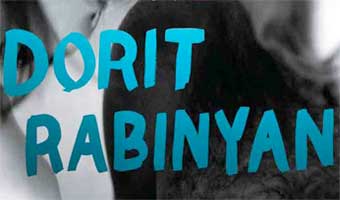 Book Review: ALL THE RIVERS
By Dorit Rabinyan
Translated by Jessica Cohen

Introduction
All the Rivers is a love story between an Israeli woman and a Palestinian man, set in New York City not long after 9/11. The lovers briefly set aside their political differences and engage in a six-month love affair that is both passionate and intense. Narrated by the woman, Liat, the novel is loosely based on Rabinyan’s own experience and, in fact, the novel is dedicated to a former lover, the late artist, Hassan Hourani.

Although the novel was an immediate best seller in Israel and was named one of the ten best books of the year by Ha’aretz newspaper, in January 2016 All the Rivers became the center of a political scandal when the Ministry of Education banned the book from Israel’s high school curriculum.

The Author
Born in Israel to an Iranian-Jewish family, Dorit Rabinyan published two other novels before writing All the Rivers. Both Persian Brides and A Strand of a Thousand Pearls were international best sellers that were each translated into fifteen languages.

Rabinyan is the recipient of the Itzhak Vinner Prize, the ACUM Award, The Prime Minister’s Prize and the Jewish Wingate Quarterly Award (London). In 2015, All the Rivers was awarded the prestigious Bernstein Award for Literature.

The Translator
Jessica Cohen is a freelance translator who translates contemporary Israeli prose, poetry, and other creative works. A graduate of The Hebrew University of Jerusalem where she earned a BA in English Literature, Cohen’s translations include David Grossman’s To The End of the Land and works by other major Israeli writers including Etgar Keret, Rutu Modan, Ronit Matalon, Amir Gutfreund, and Dorit Rabinyan. A past board member of the American Literary Translators Association, Cohen has served as a judge for the National Translation Award. Born in England but raised in Jerusalem, Jessica Cohen now lives in Colorado.

Characters and Plot
When Liat and Hilmi first meet on a cold, wintry day in a coffee shop in Greenwich Village, they strike an instant rapport. Discussing the facts that have brought each of them to New York—Hilmi, a Palestinian, to paint, and Liat, an Israeli, to work and study as a translator—they experience immediate chemistry and find commonalities. She indicates that she is often mistaken for an Arab, Indian or Pakistani and he says it “happens to me all the time, too”. From there, their romance takes off like a shot and they spend nearly every waking hour together over the course of their six month courtship.

The two fall in love and, according to friends, seem perfect for each other; but Liat has said from the outset that she is returning to Israel in May. Their affair can only last six months. Ignoring the facts of their different backgrounds that would ordinarily put them at odds with each other, Dorit Rabinyan details the aspects of their relationship that help them, like any two people, fall in love. They talk, they have shared experiences, he gives her a nickname, they make love, they do the things people in love do.

Yet when Liat calls home to Tel Aviv, she makes sure Hilmi is not nearby so her parents won’t hear him in the background. When she is with him and among other Israelis, she doesn’t speak, for fear they will judge her. When Hilmi and Liat are with his brother and other Arab friends, he takes the side of his brother, rather than defending her or at least trying to find neutral ground.

At the end of six months, Hilmi puts Liat in a cab to take her to the airport. They embrace and whisper meaningful goodbyes. She is returning to Tel Aviv and he will spend the summer in Ramallah. The irony that they will be about an hour apart (by car) yet a world apart by cultural standards is not lost on anyone.

2.     All the Rivers takes place in New York City a year after 9/11. Why do you think the author used New York in 2002 as the setting for this story? Do you think Liat and Hilmi would still have gotten together if the story had been set elsewhere? Do you think it might have ended differently had it been set in another major city outside of Israel? Could they have fallen in love if they had met in Tel Aviv or Jerusalem?

3.     Discuss the nature of Liat and Hilmi’s relationship. Why do you think Liat takes pains to keep the relationship a secret from her parents and some of her friends? Consider the scene at the train station (Chapter 19), where Liat recognizes one of the other men on the train platform. Do you think this kind of behavior is realistic?

4.     Hilmi introduces Liat to his brother, Wasim when he visits. Discuss the meal Liat and Hilmi share with Wasim and his friends, Mahmoud, Zinab and Christian. What do you think about each participant’s behavior? Do you think their behavior and arguments are analogous to those of real Palestinians and Israelis? Does Rabinyan paint these characters as stereotypical Palestinians and Israelis?

5.     Although the novel was originally written in Hebrew (with the title, Gader Haya which literally translates to Borderlife), Rabinyan points out when the characters are speaking in English, Hebrew or Arabic. How does this help emphasize each character’s personality and political viewpoints? How does the author’s use of language highlight the characters’ commonalities and differences? How does it bring them together? How does it divide them?

6.     There are various references in the novel where Rabinyan alludes to or details the Israeli-Palestinian conflict. Do you think Liat is a Zionist? If she is a Zionist, what is Hilmi? How does each perceive the conflict?

7.     In 2002 and 2003, the years in which All the Rivers is set, Israeli and Palestinian leaders, with the help of other foreign leaders including President George W. Bush, were making attempts to find common ground and forge peace. For example, in June of 2003, as part of the “Road Map for Peace”, Israeli Prime Minister, Ariel Sharon, promised to dismantle settlements in the West Bank and Palestinian Authority Prime Minister, Mahmoud Abbas, renounced all terrorism against Israel. Discuss the situation today relative to previous attempts to make peace.

8.     Hadassah Medical Organization was nominated for the Nobel Peace Prize in 2005 because of our humanitarian work in treating people of all nationalities, religions and creeds; our cooperative work environment, where religiously and ethnically diverse doctors, nurses and staff members work together to provide state of the art medical treatment for all patients; and where our work ethic provides a “bridge to peace” in spite of the Intifada which was occurring at the time. Consider Liat and Hilmi’s relationship. Due to their intimacy, they learn about each other’s moods, personality traits, dislikes and desires. Clearly, Rabinyan believes that getting to know one another is a step toward forging peace. Do you agree or disagree? Discuss other ways Hadassah helps engender peace.

Conclusion
As stated on the book jacket, “All the Rivers is a love story and a war story, a New York story and a Middle East story, an unflinching foray into the forces that bind us and divide us. “The land is the same land,” Hilmi reminds Liat. “In the end all the rivers flow into the same sea.” The liberal American in me wants to believe love will conquer all, the pragmatic thinker in me knows there are realities that are far too complex for these two lovers to overcome. All the Rivers is a good story and it will foment excellent discussion.

Is there a topic you would like to see in Women Who Learn, let us know and sign up to receive new articles by emailing programming@hadassah.org