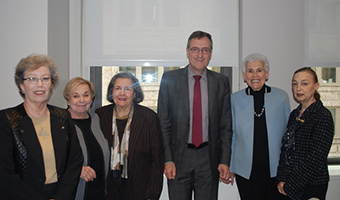 “Todah, thank you, for all that you do,” said Ambassador David Roet, Israel's deputy permanent representative to the United Nations, at a Hadassah briefing about Israel and the UN.

“I am a product of Hadassah,” he said, sharing that not only were he and his siblings born at Hadassah hospitals, but so were his older children.

The UN relationship is “critical to the future of Israel” said Hadassah Executive Director/CEO Janice Weinman during opening remarks, thanking UN Chair Ruth Cole for being a “stalwart” on Hadassah’s behalf at the UN, along with the UN Team.

During the briefing, Ambassador Roet referred repeatedly to the strategic importance for Israel of “bipartisan ties with the United States.” It is critical to combat bias and anti-Semitism at the United Nations, where anti-Israel resolutions are ubiquitous (although often not enforceable), he said, praising those he works alongside who, like him, are trying to make changes at the UN, often behind the scenes.

Combating bias at the UN requires resilience. “There was not a day we didn’t work with the UN to stop anti-Israel activity…. We have to work very hard,” he said, urging Hadassah’s perseverance and diligence in outreach, education, and advocacy. “Please continue to do it all,” he said to the full room of Hadassah members.

In the face of direct challenges, he said UN Secretary General António Guterres has pledged to fight anti-Semitism and recently spoke of Jews’ historical tie to the Temple Mount. This, the ambassador pointed out, is remarkable in the UN context. “The earth shook.”

The ambassador shared his hopes for a better UN and touched on the work ahead, from women’s leadership, innovation, Israel-Africa relations, LGBT issues at the UN, and more.

Thank you, Ambassador Roet. And thank you, US Senate. On April 28, all  100 US senators wrote to the UN: End ‘unacceptable’ anti-Israel bias.