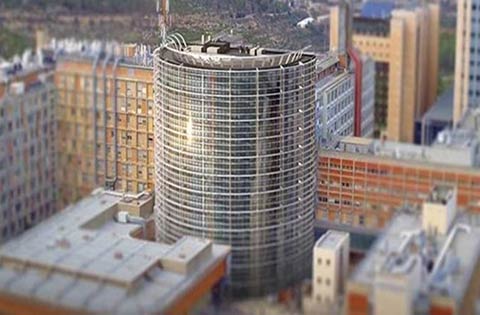 With a determination and energy undaunted by the current COVID-19 pandemic, renovation is moving ahead swiftly on the iconic Round Building, situated in the heart of Hadassah Hospital’s Ein Kerem campus. This message was delivered to more than 100 major donors to the 360 Degrees of Healing, The Full Circle Campaign in an exclusive webinar hosted by the campaign’s chair, Miki Schulman.

In addition, Prof. Dror Mevorach, director of the COVID-19 Outbreak Units and director of rare diseases at the Wohl Institute for Translational Medicine, provided a very complete and up-to-date review of COVID-19 in Israel.

Providing a detailed Round Building construction update was Gidon Melmed, director of development in the Donors and Events Department at HMO in Israel. He reported that the Dialysis Department on the mezzanine floor is already completed and is functioning in its new space. Other departments slated to occupy the building are Internal Medicine, Ophthalmology, Hematology-Oncology, Internal Medicine Geriatrics, Dermatology, and Surgical Day Care. Importantly, the addition of more than 200 much-needed hospital beds will expand the ability of the hospital to care for the burgeoning population of Jerusalem and surrounding areas.

Since the start of construction, work on the building has never stopped, Melmed noted, despite the fact that beginning this spring, as many as four floors in the Round Building were converted into COVID-19 Outbreak Units where coronavirus patients could be isolated from the general hospital population.

The fact that construction is continuing around the COVID Outbreak Units shows “the significance of this project for Hadassah Hospital Ein Kerem and for the people of Jerusalem,” Melmed explained. “It’s the historic first building, but it is also at the center of the campus. It is connected to all the other buildings around it.”

Upgrading the Round Building, originally opened in 1962, required a complete redesign not only of the building’s infrastructure but also of its patient areas. The foundation work has been completed. Workers are currently installing an entirely new electrical system, a major undertaking considering the age of the building.

“The most complex work is behind us,” said Melmed. But he pointed out that new challenges are still arising. For example, planners, taking into account the possibility of another COVID-like event, are designing an internal medicine area that could be transformed into an isolation unit where every bed would accommodate a ventilator.

A new feature in the Round Building is the safe room, a fortified structure that will strengthen the building against earthquakes and other major disruptions. On the higher floors the safe rooms will function as inpatient rooms on a regular basis and as safe rooms in times of war or terror attacks.

According to Miki Schulman, chair of the 360 Degrees of Healing Campaign, $11 million remains to be raised by Hadassah. She excitedly announced that an anonymous donor has pledged a $650,000 challenge grant for new gifts that are fully paid by December 31. The grant is retroactive to October 1.

In his update explaining how Israel is faring in the pandemic, Prof. Mevorach presented figures showing the spread of COVID-19 worldwide and, more specifically, in Israel. As of October 14, Israel has suffered more than 300,000 cases of COVID-19, with 2,000 deaths. Israel was the first in the world to enter the second wave, not an achievement he was proud of, Prof, Mevorach said, and also the first in the world to get out of the second wave. Though the first wave of infections in early spring wasn’t so large, he noted, the second wave was actually much worse because Israel exited the first wave too quickly and with insufficient restrictions.

The country has endured two shutdowns, the second one during the recent holiday period, when the number of COVID patients at Hadassah Ein Kerem, the only designated Jerusalem hospital for those patients, was higher than ever. From July through September, Hadassah was treating up to 150 patients a day, the highest of any hospital in Israel. In the weeks since, two of the four COVID units at Hadassah have closed as the number of hospitalized patients has fallen. Should the need arise, Prof. Mevorach said, it would take just hours to reopen those units to accommodate new COVID-19 patients.

Meanwhile, Hadassah doctors have been actively engaged in researching the use of therapeutics for treatment of virus victims. According to Prof. Mevorach, some of the drugs have resulted in a reduction of the mortality rate of ill patients. Others have reduced the hospital stays of some patients.