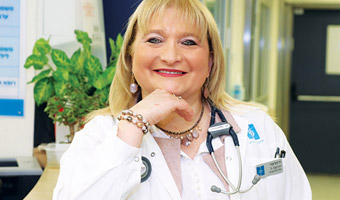 She must have been born with Hadassah in her DNA. Dr. Sigal Sviri speaks of her first memories, running over the green lawns of Hadassah’s Meir Shfeyah Youth Village. As a child, she treated her sick dolls, and she asked her parents for a medical textbook for her eighth birthday. When she was accepted to medical school, her first choice was the Hebrew University-Hadassah School of Medicine. She became part of the team of Israel’s first Medical Intensive Care Unit (MICU), at Hadassah Medical Organization, of course.

“I’ve been part of Hadassah for even longer than I’ve been married,” says Dr. Sviri, 53. “But then, I did meet my husband at Hadassah Hospital, too.”

Dr. Sviri was born in 1965 while her parents were working as youth counselors at Meir Shfeyah, after falling in love while serving on the same IDF intelligence base.

After serving in the IDF at the base where her parents met, she was accepted to all the medical schools to which she applied. Her first choice was the Hebrew University-Hadassah School of Medicine, “because it’s the best.”

“I was drawn to internal medicine and intensive care because they are so holistic and complicated, and every day you are fighting to save lives,” she said.

In those days, complex internal medicine patients were treated mostly in the internal medicine wards, while surgical patients were treated in the intensive care units. “There was growing realization that patients with many compromised organs and complex conditions needed the attention of a specialized Medical Intensive Care Unit, and Hadassah pioneered this concept in Israel,” she says.

One of her patients was Israel’s President Ezer Weizman. His security unit accompanied him, and Rafi Saroussi, the head officer was smitten by “Dr. Sigal,” as everyone called her. His fellow officers were astounded that he had the audacity to court such an obviously brilliant doctor, but he was undeterred. Dr. Sviri liked his style and they were soon married in the Ein Yael gardens in Jerusalem.

A few years later, their two sons, Ori and Ron, were born, 13 months apart. “This is where being a mom and an intensive care doctor—with calls 24/7—is a challenge,” she said. “Both my mother and mother-in-law were very helpful, and my husband was willing to take on weekends and nights by himself. My sons’ reality has always been that their mother is making life and death decisions and may be called away.”

Dr. Sviri works hard at team building. “There is no distance among the doctors and nurses; we support and teach each other in our unit. We have staff from all religious backgrounds, including Israeli Jews, Arabs, and Palestinians with diverse political opinions. Our patients also come from a mix of backgrounds in Israel, Gaza, and the West Bank. We don’t allow any politics in our unit or in our hospital.”

Her hardest day ever on the job was also a breakthrough for her. Caring for a young man from the hematology department, the team tried unsuccessfully to bring him back to life after his heart gave out in the unit. “We all wept together with his father. At first, I was overwhelmed, both by the loss and also by the emotional burden. Then I realized that we’d done everything we could, and yes, it was okay to show our grief.”

With Dr. Sviri at the helm, the Medical Intensive Care Unit is known for solving difficult and challenging cases, thanks to the broad knowledge base of the doctors and nurses and advanced, sophisticated technology. “We always investigate and aim to improve, but as the unit head, I can tell you we’ve always done our best. Even though the cases you can’t help haunt you, the ones who leave the unit alive and come back to visit us give us enormous strength.”

With increased longevity of the population, advances in cancer treatment and technology, the demands on the MICU have vastly increased. Demand exceeds the nine beds in the current unit. “We are so pleased to hear that our unit will be greatly expanded in the renovated Round Building. The more beds, the more lives will be saved. That’s the Hadassah way.”