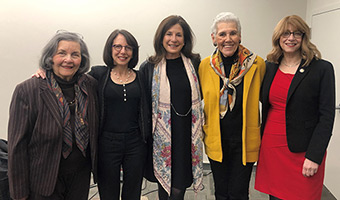 It has been over 100 years since Hadassah’s founder Henrietta Szold transformed her study group into a movement that empowered American women to improve lives in Israel. With that mission still front and center and now global in scope, Hadassah recently sponsored a panel presentation, together with Jewish Women International, to highlight ways to empower and protect women in today’s world, as part of the annual forum of the United Nation’s Commission on the Status of Women.

Each of the three panelists—from the Hadassah Foundation, Jewish Women International, and the New York State Assembly--made it perfectly clear that if social justice is to be achieved, women from diverse communities must join forces to shine a spotlight on gender injustice, be trained to be leaders, and advocate for societal change. Each of the panelists showcased successful strategies to empower and protect women, while emphasizing that, of course, much more needs to be done.

In her introductory remarks, Cole shared with the audience that the Hadassah Foundation, investors in social change to empower girls and women, has awarded eight million dollars in grants since Hadassah created the Foundation in 1998.

The first presenter, Sue Beller, chair of the Hadassah Foundation, explained how the mission of investing in social change enables the Foundation to have the greatest impact. The goal, in funding its grantees, she related, is to achieve fundamental shifts in society. To illustrate the perspective, she highlighted the work of three grantees:

Itach Maki (which means “with you” in Hebrew and Arabic), fought successfully for equal pay for Arab and Ultraorthodox women working as teachers and teacher’s aides in nongovernmental schools. The organization also achieved a victory for women who were excluded from running for the Knesset (Israeli parliament) by one of the religious political parties that did not allow women on its slate.

Center for Women’s Justice (CWJ) successfully pioneered using tort law to seek economic damages for women whose husbands would not give them a divorce. Thanks to CWJ, Bellar reports, “this is now a common tool used to provide economic leverage for these women. It has proven to be an effective incentive for husbands to give these wives their freedom.”

The Israel Women’s Network has battled successfully in the Israeli courts against women’s exclusion from various courses that are necessary before they can enter traditionally male trades.

Loribeth Weinstein, executive director of Jewish Women International (JWI) spoke about the importance of gender balance, whether in board rooms, government, the media, or the wealth sector. “This balance is essential for communities to thrive,” she said. JWI’s daily work, Weinstein emphasized, is to fight domestic and sexual violence by training women to lead and by mentoring the next generation. Weinstein also noted that JWI has a triage approach, which includes education and training, advocacy for legislation on both the state and federal level, and philanthropy. One aspect of JWI’s philanthropy is delivering financial training resources to battered women’s shelters.

The third panelist was New York Assembly member Linda B. Rosenthal, who noted that she is only the second woman to serve in her seat, representing the Upper West Side district of New York, including parts of Hell’s Kitchen. She spoke about her sponsorship of legislation to crack down on human trafficking (a 32 billion-dollar industry) to ensure that the women who are enslaved in this manner are not viewed as criminals, but rather victims who need support, just as other victims of sexual violence. Recently, Rosenthal introduced legislation to extend protection against rape for those women who were convicted of prostitution in the past. Currently, they are excluded because they are viewed as criminals, rather than victims. Another bill that Rosenthal has cosponsored proposes a partnership with hotels and motels to train employees to recognize trafficking at their facilities and report it to the authorities.

During the question and answer segment moderated by Grossberg, a participant related that all too frequently women who have escaped from trafficking return to it at a later date. Rosenthal confirmed that this is true, since sometimes they have difficulty finding a job, lose their apartments and, not knowing what else to do, they return to what they know.  “More focus needs to be placed on long-term help for these women,” she acknowledged.

Before the session concluded, the panelists reminded everyone that all of our voices matter in gaining greater empowerment and protection for women.