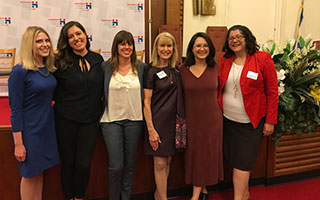 On June 8, nearly 100 women and men gathered in downtown Manhattan for a  discussion on “Feminism and Zionism: Exploring Recent Tensions,” part of Hadassah's "Defining Zionism in the 21st Century" series. The five Jewish women on the stage — including moderator Bari Weiss of the New York Times — represented widely varying views, traversing the political spectrum. In recent months, there has been heated debate in the modern feminist movement, and this conversation was designed to create an opportunity for civil dialogue — and a deeper understanding of other perspectives. As Hadassah President Ellen Hershkin said in her opening remarks, there is no "one-size-fits-all" version of Zionism. This is something we celebrate at Hadassah, while understanding that understanding nuance and difference is important. The women discussed aspects of intersectionality within the context of the revitalization of the American feminist movement.

“People hear the word Zionism and they just jump to one very specific definition of what they think that means. There’s not a lot of room for nuance,” said one speaker, journalist Marisa Kabas.

Dr. Sharon Weiss-Greenberg, executive director of JOFA: The Jewish Orthodox Feminist Alliance., said that she is a feminist, a Zionist, a Jew, a mother, a teacher, a wife, a friend and more. Together, these make up who she is, and one does not cancel out another. The panelists grappled with the notion of being proud feminists and finding safe spaces within a movement where anti-Zionist rhetoric too often goes unchallenged. Why, asked Emily Shire of Bustle, are Jews and Zionists the only group being singled out, when there are an innumerable host of human rights abuses going on around the world? How did Jews and Zionists get singled out?

Our speakers discussed the difficulty in facing rising anti-Semitism in the United States, and how online attacks against journalists, including each and every one of our panelists, has increased. The women thoughtfully gave their views on the importance of engaging those from the “other side” as well as the importance of staying true to who you are and being proud of what you believe in.

Libby Lenkinski, an Israeli woman who is also the vice president of public engagement at the New Israel Fund, quoted her friend, Knesset Member Merav Michaeli’s inaugural Knesset speech: “Growth can’t come from a place of victimhood. Growth can only come from a place of strength,” Lenkinski continued, "The strength it will take for us in Israel (and the Diaspora) to not think of ourselves as victims … that transition is something that I think is taking place in our generation”.

“This is a very special moment to be a feminist. Especially a Zionist feminist,” said  Hershkin. The conversation ended on an upbeat note, reminding all that yes, we can be both.

Our Defining Zionism in the 21st Century series seeks to change the way people talk about Zionism. The aim is to present meaningful, varied discussions that inspire our members and the public to have informed conversations. You can watch past Defining Zionism programs at Hadassah.org/definingzionism.