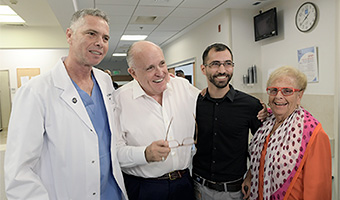 Former New York City Mayor Rudy Giuliani and Dr. Maria Ryan, Chief Executive Officer of Cottage Hospital in Woodsville, New Hampshire, visited Hadassah Medical Organization in Jerusalem today to get an update on Hadassah's management of terror events. "This hospital is a blessing," said Mr. Giuliani. "I have been here so many times to see the tragic consequences of terrorism. It's wonderful to be here and see the good you do. Count me among your supporters."

The delegation entered the Swartz Center for Emergency Medicine Shock Trauma Center where they viewed the protective doors and windows that can seal off the Center, as well as the secluded VIP trauma room where dignitaries get additional security. Chief of Surgery Prof. Alon Pikarsky described the protocols developed at Hadassah that are used successfully for treating mass casualties. Prof. Pikarsky explained how the most experienced surgeon does the initial triage when patients arrive, in contrast to the practice in many medical centers where triage is done by a resident. "Sending each patient for the correct treatment is the key to saving lives," said Prof. Pikarsky.

A highlight of the visit was a reunion with terror survivor Dvir Musai, 29, whom Mr. Giuliani, then Mayor of New York City, visited at Hadassah Hospital after Dvir, then only age 13, was gravely injured in a terror attack. Mr. Musai was on a school outing to pick cherries when he stepped on a mine placed by a terrorist. He has undergone more than 30 operations at Hadassah Hospital.

"I'm here, standing on my own two feet, having served in the Israel Defense Forces, happily married and a father of two," said Mr. Musai. "I remember your visit, understood you were important, and felt strengthened by the support you gave me. I'm so honored to meet you today."

Mr. Musai now works as the facilitator of the Hadassah Herzstein Heritage Center and speaks to hundreds of groups in Israel and abroad.

They didn't want to leave without seeing the famous Chagall Windows.