From Dream to Reality: A Key Date in Zionist History 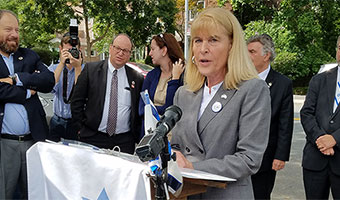 "Philosophically considered," Hadassah founder Henrietta Szold once said, "there is nothing but Zionism... to save us."

This week, we mark the 120th anniversary of the First Zionist Congress with pride and with hope. Pride, that for over 100 years members of Hadassah have been among the most prominent Zionists, steadfastly working to see the creation of our Jewish state, and foster its growth. Pride, that in these troubling times where anti-Zionist and anti-Semitic rhetoric is at a high, we are still here, counted among prominent Zionists, using Hadassah’s model of "practical Zionism" in our endeavors of tikkun olam. Hope, that our work today will lead to a more just world tomorrow.

The first Zionist Congress convened on August 29, 1897, in Basel, Switzerland. It was here that, in response to growing anti-Semitism and attacks against Jews across Europe, Theodor Herzl laid out his plans to establish a Jewish homeland. Though no women were present at the first Zionist Congress, Hadassah would soon help drive conversation. In 1923, three delegates represented Hadassah, making sure that American Jewish women’s Zionist voices would be heard and counted, just as we continue to do today.

We trace Hadassah's "practical Zionism" through our founder, Henrietta Szold.  In 1899, only two years after the first Zionist Congress, Szold became a member of the Executive Committee of the Federation of American Zionists, its only female member. During World War II, she served as secretary of the Provisional Executive Committee for General Zionist Affairs — again, the only woman. Upon traveling to pre-state Israel in 1909, she saw a dire need for medical care in the holy land set about collecting funds after she returned to the US. In 1918, the American Zionist Medical Unit, headed by Szold and Hadassah nurses, embarked for Palestine to treat Jews and Arabs alike. Szold would come to be credited with developing the infrastructure and model of Israel’s modern medical system.

Knowing that she could never achieve the full expression of her efforts in male-dominated organizations, she formed her own.  Hadassah members were a driving force in American Zionism, serving on the boards of all major Zionist causes in the push to create the Jewish State of Israel. Szold mobilized hundreds of thousands of women around the country to make their voices heard.

We live in a time when the goals of the first Zionist Congress have been achieved tenfold; Israel is a thriving democratic, Jewish state. But that does not mean that Zionism is over. On the contrary! Just as Zionism was an aspirational and a practical concept, so too is our modern Zionism.

Today, we celebrate the anniversary of the first Zionist Congress through the good works that we do: Our two hospitals in Israel are among the most highly regarded in the Middle East, known for cutting-edge medical research and care. In the US, our members meet with government officials to pass legislation on a myriad of issues. We are a convener on the conversation of Zionism, hosting a monthly speaker series bringing in experts from around the world to make sure the conversation is relevant and positive.

As Theodor Herzl once said, "If you will it, it is no dream." As we celebrate the many ways Zionism has transformed from a distant dream to a flourishing reality, we celebrate everyone to this day who continues to work to advance Zionism, especially with us at Hadassah.

On August 28, Hadassah National President Ellen Hershkin delivered a version of these remarks at a ceremony commemorating this historic milestone, part of an American Zionist Movement (AZM) celebration featuring Jewish leaders, government officials, the Consulate of Israel. The commemoration took place at the Theodor Herzl Memorial in New York City’s Freedom Square Park in Queens. Hadassah is a member organization of AZM.