Full Steam Ahead for Construction of New Hadassah Rehab Center 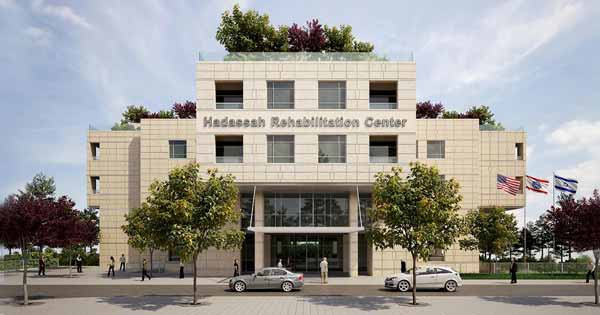 A beautiful Jerusalem stone facade, a spacious entryway with large windows that fill the building with light, two large hydrotherapy pools, inpatient and outpatient treatment areas, a synagogue and an interfaith prayer center are just a few of the features of the new Hadassah Mount Scopus Rehabilitation Center, scheduled to open in the second quarter of 2023.

The current half-century-old Mt. Scopus facility, the only provider of rehabilitation services for the 1.2 million residents of the greater Jerusalem area, is much too small to meet the existing demand. Unlike many cities around the world, Jerusalem has the added responsibility to care for the thousands of soldiers who suffer debilitating injuries in their missions for the Israel Defense Forces (IDF), as well as the victims of terror attacks. This is in addition to routine rehabilitative care for individuals who are injured in accidents or suffer a stroke or other debilitating conditions. Also, as Dr. Tamar Elram, director of Hadassah Mt. Scopus, relates, “We are seeing a tidal wave of demand for rehabilitation therapy in light of the COVID-19 pandemic. A wide range of tailored rehabilitation services is essential to address the emerging cognitive, neuropsychological, motor sensory, respiratory and functional impairments.”

The new center is the flagship project of Hadassah International, which has taken on the leading role in fundraising for the new facility, with support from donors of Hadassah, The Women’s Zionist Organization of America, and the Hadassah Offices in Israel. The late Rabbi Yechiel Eckstein, founder and president of the International Fellowship of Christians and Jews (IFCJ), also was a devoted fundraiser for the new facility. On January 2, 2019, Rabbi Eckstein, together Dr. Elram, laid the cornerstone for the new rehab center. Despite the pandemic, construction is forging ahead. All the floors have been casted, other than the one on the roof level, and detailed plans for the interior are complete. The interior contractor is slated to begin working on the infrastructure in the second quarter of 2022, while a sample room is already under construction to enable the management and medical teams to assess its functionality and consider any changes to the design.

The new eight-story rehabilitation complex will have 132 beds, in contrast to the current 38. Comprising nearly 19,500 square meters (209, 896 square feet), it will be the most sophisticated acute and sub-acute rehabilitation center in Israel. Outpatient treatment areas will allow for day hospitalizations, and four inpatient wings—neurology, geriatrics, spinal cord/orthopedics and ventilator-dependent—are planned, along with hotel rooms, clinics, laboratories, robotics areas, conference halls, seminar rooms, a rooftop terrace and a café.

Chaim Lev Tov, a soldier in an elite unit of the IDF, was the victim of a deadly explosion while on a mission to neutralize the tunnels in Gaza from which Hamas was launching attacks. He suffered extensive injury to his arms and legs. “You wake up to a reality in which you are no longer what you once were,” he says. “The future looks very grim.” But with the help of Hadassah’s rehabilitation specialists and Lev Tov’s hard work, he regained the use of his arms and legs. Lev Tov eventually ran 20 kilometers in the Jerusalem Marathon.