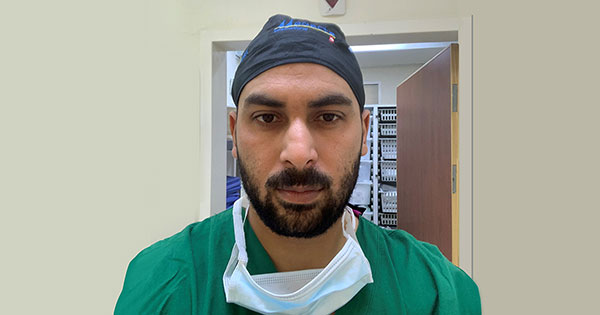 If you grow up in Arraba, in northern Israel, there’s a good chance you will become a health professional because Arraba is among the towns with the world’s highest number of nurses and doctors per capita. But only one of them is the first to receive a doctorate from the Henrietta Szold Hadassah-Hebrew University School of Nursing.

Mahmoud Khateb, age 33, holds that honor, thanks to the Patricia Lapan Hadassah-Hebrew University School of Nursing Scholarship Program. Achieving a bachelor’s and master’s degree and now a doctorate, Khateb studied for 14 years at Hadassah.

“I knew I didn’t want to be a nurse who does his job and goes home,” relates Khateb. “Rather than using information, I wanted to create it. Without research there’s no progress.”

While studying toward his master’s degree, Khateb examined the methods that staff in Hadassah’s Department of Pediatric Hemato-Oncology use to evaluate children’s pain and medicate to alleviate it. At the same time, Khateb worked as a nurse in the Department of Bone Marrow Transplantation and Cancer Immunobiology.

By the time Khateb completed his master’s degree, the nursing school was ready to launch its doctoral program. Khateb was one of five students accepted in 2016.

In seeking out an adviser, Khateb found senior lecturer Dr. Anna Woloski Wruble, EdD, who chairs the doctoral program. Given that her specialty is sex therapy, Khateb investigated an issue in that field: how bariatric surgery affects a woman’s self-image, mental state and sexual functioning.

It took Khateb five years to complete his thesis while working full time and, together with his wife, Elham, bringing up two children, Tala, now age six, and Omar, age three.

“Dr. Mahmoud Khateb’s hard work, fortitude and determination made it possible,” says Dr. Woloski Wruble. “We are proud of his accomplishment and look forward to his future endeavors and those of his doctoral colleagues with whom he shared a bench.”

Both student and adviser thank the Lapan family for their contribution to the doctoral program and their overall involvement in the nursing school. Patricia Lapan had made a generous gift in her will to Hadassah before she passed away in 2012. The fact that she was a nurse adds to that sense of connection for Khateb.

“The Lapan gift enables us to continue with our studies with much less financial worry,” says Khateb. “The members of the Lapan family are part of our success. They have allowed us to delve deeper, to use better statisticians. We couldn’t do this without that financial backup.”

Dr. Woloski Wruble adds, “By offering financial support to nursing programs, including the PhD program, the Lapan Scholarship Fund has enabled the nursing school to afford the means to produce the next academically prepared leaders in nursing. These leaders will be fortified with the vision and skills of evidence-based practice, and they will contribute to quality patient care through direct care as well as research, policy and education. We are all in this together! Hadassah is truly a place where a dream can become a reality.