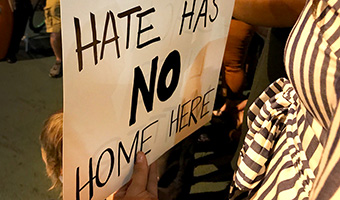 We condemn in the strongest possible terms the violence and hateful rhetoric of the “Unite the Right” rally. This outward display of racism and prejudice has no place in our society.

Some protesters chanted “Jews will not replace us” while marching with Nazi flags. As the members of Hadassah, we cannot help but have special understanding of the dangers of bigotry for all people.

We applaud the bipartisan condemnation of domestic terrorism by elected officials, especially those who pointedly acknowledged the dangerous neo-Nazi and white supremacist ideologies behind the event.

The events of this past weekend shed light on a shocking level of hatred that is alive in our country.

We join with other Jewish, interfaith, and secular organizations condemning neo-Nazism and white supremacy. We urge Hadassah members to speak out in the face of hatred.

As the largest women’s Zionist organization in America, we say loudly, and clearly—we do not tolerate this heinous type of hatred in America, or anywhere in the world.