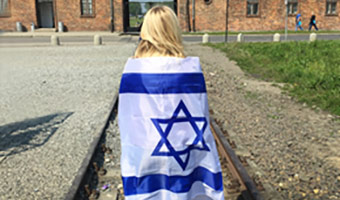 Hadassah stands with the government of Israel in saying “we have no tolerance for distorting the truth, for rewriting history, or for Holocaust denial.”

Poland’s President, Andrzej Duda, signs “Holocaust Bill” into law, imposing fines and up to three years in jail for anyone who claims that Poland, or the Polish Nation bore any responsibility or complacency for crimes against humanity committed by the Nazi party on Polish soil. Hadassah stands with the government of Israel in saying: “we have no tolerance for distorting the truth, for rewriting history, or for Holocaust denial.”

The Law and Justice Party of Poland seeks to eliminate, in totality, any blame of Polish nationals or the Polish nation in any crimes committed against the Jewish people and others on Polish soil during WWII. This bill is part of a string of legislation by the right-wing populist, national-conservative party in Poland to garner major opposition from the United States, Israel and much of the European Union.

Only 380,000 of Poland’s 3 million Jews survived the Shoah, according to Israel’s Yad Vashem Holocaust Memorial Museum. Yad Vashem has commemorated close to 6,700 non-Jewish Poles who helped to hide and save Jews during WWII, the highest number of “righteous among the nations” of any country. However, we know all too well of Poles who turned in Jewish neighbors and others to the Nazis, were collaborators, and worse. We know of many Jews who were unable to return to their homes in Poland after the war. Are we to forget these stories? Deem them all false?

To this day, groups of Jews who return to Poland on programs such as “March of the Living” experience blatant anti-Semitism. Poland’s current government seems to be turning a blind eye to its role in past horrors, as well as present xenophobia and prejudice.

In order for history to be repeated, one need only be silent in the face of hate. We have taken a vow for our mothers and fathers, our grandparents, friends, children and grandchildren to never forget. We cannot change what happened, but as members of Hadassah, the Women’s Zionist Organization of America, Inc., we can stand up and speak the truth. #WeRemember.

Hadassah stands firmly with the governments of Israel and the United States in opposition to this bill, and we welcome the Israeli government’s proposal for continued dialogue with Polish officials to amend the text of the bill to protect those who speak the truth. We believe steadfastly in democracy, which holds freedom of speech as one of its most vital pillars.