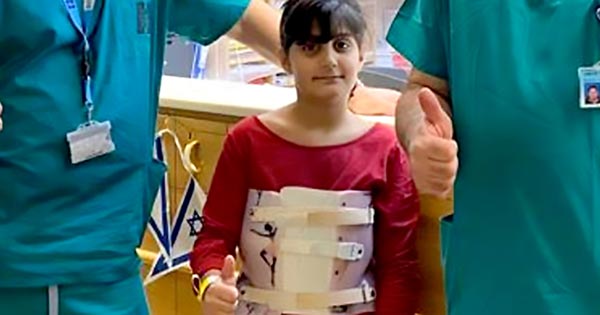 Coral, a nine-year-old girl from Jerusalem, will never forget last Purim. Instead of dressing up and enjoying an upcoming holiday party with her friends, she lay on the floor with back pain that prevented her from walking, sitting or standing straight.

“She cried the whole time,” Coral's mother Revital relates, as she recalls those difficult days in March. “Coral didn’t want to go to school and, when the class went for a walk, she remained on the floor of the jeep, writhing and screaming in pain. We were all sure she was exaggerating, and we didn’t understand what she was going through.”

At first, Coral’s parents thought the pain was due to a fall, so they took her for an x-ray of her back. It did not reveal any abnormalities. They were sure that it was only a matter of time before the pain would go away on its own. “But,” Revital says, “the intensity of the pain increased with time.” Further examinations, she says, led to a diagnosis of scoliosis, “but we still could not understand why Coral’s suffering was so great.” So, they made an appointment for a CT scan at Hadassah Hospital Ein Kerem.

“After the CT scan was completed,” Revital continues, “the technician asked us to wait outside. I immediately guessed it was something out of the ordinary, and I told my husband it sounded strange to me.”

The technician explained that Coral had a rare tumor and it was urgent that they take her to the emergency room. “It was 6:30 pm, and we were standing in the middle of the hallway,” Revital says. “We felt the sky fall in on us. It's a horrible situation when your child has been complaining of terrible pain and everyone tells her to straighten up, that everything is fine, and then you discover the worst of all,” Revital adds.

"Coral was brought in with uncontrollable back pain, lying in bed and barely able to perform routine functions,” describes Dr. Joshua E. Schroeder, director of Hadassah’s medical unit for spinal deformities. “She was suffering from a very rare tumor that had enveloped her entire spinal cord. Any incorrect movement could have left her paralyzed, or even endangered her life. The very severe pressure that the tumor exerted on the spinal cord caused a vertebral fracture and severe scoliosis in the spine. This combination made us urgently hospitalize Coral and try to create a solution for her that would get her out of this situation safely.”

Because it was necessary to shrink the tumor before any back surgery could be performed, Coral was hospitalized in Hadassah’s pediatric hemato-oncology department under director Dr. Gal Goldstein and head of pediatric nephrology Dr. Oded Volovelsky. In consultation with colleagues at Memorial Sloan Kettering Cancer Center in New York, they developed a treatment plan to shrink the tumor using a biological therapy.

Dr. Schroeder adds, “This was a vascular tumor that needed to be analyzed very carefully. If it’s operated on without the greatest care, the child could die on the table. Here was a real drama because, on the one hand, the tumor was endangering Coral’s life and could lead to her death at any moment, and, on the other hand, the surgical procedure is a complex operation in which any wrong movement could cause the girl to become paralyzed.”

To come up with the best solution, Dr. Schroeder explains, “we took the information we had about Coral and combined our Hadassah knowledge and experience with what our colleagues at Memorial Sloan Kettering had experienced in New York. The result was a multi-layered treatment plan.

After Coral spent a month under treatment in the pediatric hemato-oncology department, she was prepared for her back surgery. “We began by giving Coral a medication that, by depriving the vascular tumor of its blood supply, turns it into a soft tissue tumor,” Dr. Schroeder says. “It is an experimental drug for tumors of this type.”

Then, Prof. Jose Cohen, director of the medical unit for endovascular neurosurgery and senior anesthesiologist Dr. Rawhi Hashem blocked the blood vessels that supply the tumor, reducing the tumor’s tendency to bleed. Finally, Dr. Schroeder relates, he and orthopedist Dr. Hananel Shear Yashuv “excised the tumor in its entirety, stabilized the spine and corrected the severe scoliosis.”

Wearing a brace and walking tall, Coral just finished her school year and is enjoying a well-deserved vacation in Eilat.