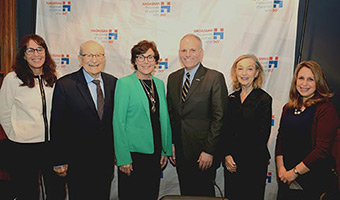 On October 30, Hadassah hosted a special event on Capitol Hill to educate and advocate in favor of the Never Again Education Act and was honored to host the lead sponsor of the Senate bill, Senator Jacky Rosen.

Urgently addressing the rise in extremism, hatred, intolerance, and bigotry across America is a critical issue unifying many on Capitol Hill. Both parties agree that strong leadership is required and that expanded Holocaust education is an essential strategy for addressing these contemporary challenges.

“People throughout the United States are increasingly concerned about acts of violence, acts of hatred, and within the Jewish community, the rise of antisemitism. The Never Again Education Act speaks to those concerns by increasing the availability of Holocaust education in America, and Hadassah is very proud to stand behind this bipartisan effort,” said Weinman.

Unfortunately, less than a quarter of all states have laws requiring Holocaust education.  And even those with such laws leave teachers and administrators without sufficient support. The Never Again Education Act, with nearly 300 cosponsors in the House and 20 in the Senate, would help to change that by establishing a fund at the U.S. Department of Education – the Holocaust Education Assistance Program Fund – which will finance grants to public and private middle and high schools to help teachers develop and improve Holocaust education programs.

“Hadassah members have led efforts to build support for this bill since its introduction in the House of Representatives. America needs this legislation because education has the power to heal and save lives. Hadassah members are fully committed to seeing this bill through to its ultimate passage,” said Weinman.

Read the Jerusalem Post's coverage of the briefing ›

You can be an advocate for combating extremism, hatred and bigotry by visiting the National Action Center and urging your senators and representatives to support the Never Again Education Act.  Help ensure students and teachers across America have access to quality Holocaust and anti-hate materials and education that will bring its lessons for contemporary conflict to life for millions of students.