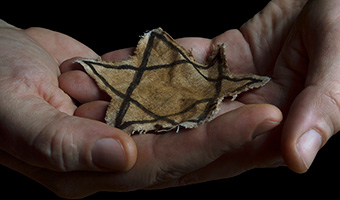 Hadassah proudly stands with the ADL and coalition partners in speaking out against anti-Semitism, signing a timely joint letter this week to urge Congress to act before the end of this Congressional session to combat anti-Semitism abroad. The ADL-sponsored letter addressed two bills Hadassah has long supported: The Special Envoy to Monitor and Combat Anti-Semitism Act and the Combating European Anti-Semitism Act.

One way Hadassah fights anti-Semitism and hate is through our efforts to advance crucial legislation that will create tangible action. This is one of our advocacy priorities. Just this week, CNN shared a survey on the prevalence of anti-Semitism in Europe, in which one-third of respondents said they knew "just a little" or "nothing at all" about the Holocaust. One-third said that Jews today use the Holocaust for their own gain.

"With anti-Semitism on the rise, our leaders must act swiftly to address this global issue and pass the Special Envoy to Monitor and Combat Anti-Semitism Act and the Combating European Anti-Semitism Act. At the same time, as the convening nonprofit organization of the bipartisan Never Again Education Act, Hadassah is committed to building support for this key legislation to expand Holocaust and anti-hate curricula," said Ellen Hershkin, Hadassah National President.

We, the undersigned organizations, strongly encourage you to do everything in your power to pass into law two important pieces of legislation on combating anti-Semitism abroad before the end of this session of Congress: the Special Envoy to Monitor and Combat Anti-Semitism Act (S. 1292/H.R. 1911) and the Combating European Anti-Semitism Act (S. 198/H.R. 672).  We believe both of these bills are important for ensuring American leadership in the global fight against anti-Semitism, and we believe action on these bills before Congress ends its session would send an important message that America will not remain silent as international Jewish communities are threatened.

The simplest way forward would be for the Senate Foreign Relations Committee to discharge these bills without delay and for the Senate to then hold a timely vote on each bill.  We also would enthusiastically support efforts to find other vehicles to pass these common-sense bills, including attaching them to key funding bills that must be passed before the end of the year.

The United States has been without a Special Envoy to Monitor and Combat Anti-Semitism since January 2017, even though this State Department position is mandated by law.  Meanwhile, anti-Semitic assaults increased in the U.K. in 2017 by 34% according to the Community Security Trust.  In France, violent anti-Semitic acts increased by 28% in 2017 according to the French Interior Ministry.  Anti-Semitic vandalism increased by 40% in the Netherlands in 2017 according to CIDI, the Dutch anti-Semitism monitoring organization.  Additionally, in 2018 a broad swath of leaders from the Jewish communities in both Poland and Ukraine issued open letters decrying a rise in anti-Semitic speech or incidents in those countries as well.

The Special Envoy to Monitor and Combat Anti-Semitism Act emphasizes the urgency of filling this special envoy position in a timely manner and lays out absolute minimum qualifications for the job.  It would also boost the envoy's chances of success by ensuring that he or she reports directly to the Secretary of State, by elevating the position to the rank of ambassador, and by authorizing the envoy to coordinate efforts across the entire U.S. government with regard to anti-Semitism in foreign countries.

We would also encourage you to ensure that any final version of this bill include the amendment adopted in the House that would set a limit on the time that this position is theoretically permitted to remain vacant, stating that "not later than 90 days after the date of the enactment of this Act, and not later than 120 after any such position becomes vacant, the President shall nominate the Special Envoy for Monitoring and Combating anti-Semitism under section 59 of the State Department Basic Authorities Act of 1956, as amended by subsection (a) of this section."

The Combating European Anti-Semitism Act also makes a worthwhile contribution to this effort.  It declares that it is in the U.S. interest to combat anti-Semitism at home and abroad, that there is a need to ensure the security of European Jewish communities, and that the U.S. should continue to emphasize in multilateral bodies the importance of combating anti-Semitism.

This bill also amends the International Religious Freedom Act of 1998 to require the State Department's annual report on International Religious Freedom to include, for each relevant European country, a description of the security needs of European Jewish communities, efforts by European governments to adopt and apply a working definition of anti-Semitism, educational efforts to mitigate anti-Semitic animus, and U.S. efforts to share information and best practices with local institutions to combat anti-Semitic incidents in Europe.

As this bill states, "anti-Semitism is a challenge to the basic principles of tolerance, pluralism, and democracy, and the shared values that bind Americans and Europeans together."  We look to our leaders in Congress to take action during these critical times, helping to ensure American leadership in the world and the protection of threatened Jewish communities abroad.