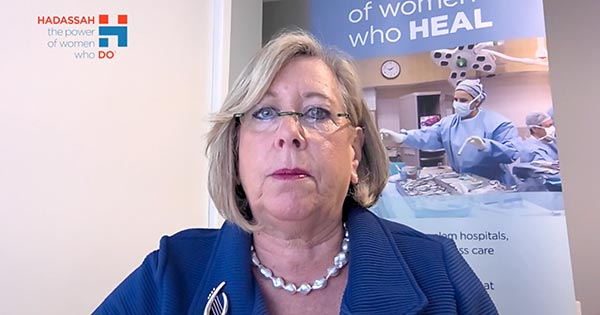 Against the backdrop of an alarming rise in antisemitism in the US and across the globe, Hadassah, legislators, faith leaders, celebrities and other major Jewish organizations spoke on Thursday at a virtual rally to express solidarity and a renewed focus on ensuring the safety of Jewish communities. Earlier this month, Hadassah and four other organizations wrote to President Joe Biden and called upon him to take swift action in response to the violence, intimidation and bigotry spreading from coast to coast.

Hadassah National President Rhoda Smolow said in the Day of Action Against Antisemitism virtual rally that, “We are no strangers to antisemitism, nor naïve about the perils of hatred. But what for decades lurked in the shadows is spilling out into the mainstream . . . Antisemitism, violence and intimidation are unacceptable and un-American.” Smolow concluded by saying, “Today’s rally shows that we are all in this together. And together we will build the more peaceful and tolerant world we want for ourselves, our children, our grandchildren and for every generation.”

Hadassah has played an instrumental role to date in supporting efforts to combat antisemitism, hatred and bigotry. As a driving force behind efforts at the state and federal level to strengthen Holocaust education, enhance the role of the US Special Envoy to Monitor and Combat Anti-Semitism, stop antisemitism from being taught in schools overseas and build support for the International Holocaust Remembrance Alliance working definition of antisemitism, Hadassah members are demonstrating their commitment to building a more peaceful and tolerant world.