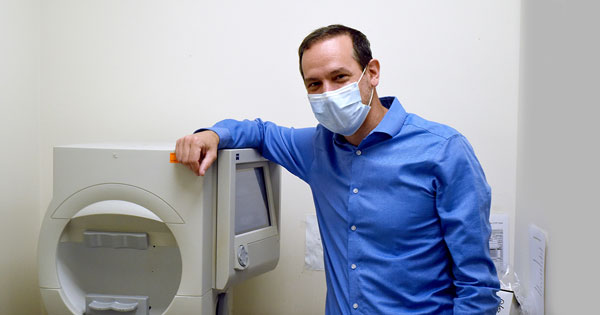 With two other soldiers, American-born Nathaniel Felber was guarding a civilian bus stop. A car pulled up. Out stepped a well-groomed young man, in his hands a submachine gun. In seconds, Felber’s two fellow soldiers were dead, and Felber, shot in the head, was barely alive. He was rushed to the Swartz Trauma Center at Hadassah Hospital Ein Kerem and then to surgery, where a team, led by neurosurgeons, fought to save his life. In the days after surgery, his parents and siblings waited on the wooden benches outside the intensive care unit in the Sarah Wetsman Davidson Hospital Tower. At last they felt secure that Felber would live, but they knew that his recovery would be slow.

For three years Felber, now 24, has undergone surgeries and rehabilitation. He has only regained minimal speech, so it's hard to interpret what he feels. His therapists and his mother, Judi, were puzzled with one of his habits. Felber always looked to his left, toward his shoulder. They weren't sure if it was a problem with his shoulder or with his neck muscles. His brain injury limited his right-sided peripheral vision. Combined, that meant he saw the world through the narrow field left and over his shoulder.

Senior neuro-ophthalmologist Dr. Josh Kruger suspected that the problem wasn’t in his shoulder, and he was right. The problem was in Felber’s eyes.

“His is one of the most complicated cases that I’ve encountered,” says Dr. Kruger, who moved to Israel from Canada. “Not only was he not seeing to the right, but also he was not seeing what was in front of him because it was no longer in his visual field. In addition, he had asymmetric abnormalities in both eyes. With his extreme difficulty in verbal communication, no one really knew what he was experiencing. Movement in our eyes is dependent on six muscles, pulling in four directions. In Felber’s case, the muscle that should have helped him look right was, Dr. Kruger explains, “essentially dead. It wasn’t working.”

Kruger believed he could transplant part of the muscle that pulls the eye upwards to replace that dead muscle. It worked.

“Every so often you think to yourself, ‘my medical training really prepared me for this case,’ and I had to use all my medical skills to help him out.

“I believe that, unfortunately, there are a lot of people who are incapacitated and can’t communicate who have visual disturbances that might be similar to Nathaniel’s. We need to increase awareness that they need to have a proper assessment with a specialist.”

Says Judi Felber, “I meet other mothers and families of people with traumatic brain injury, and it seems to me that the care Nathaniel received and continues to receive at Hadassah is far superior to anything else I have heard of from others. Thank you, thank you, thank you to the entire Hadassah team. You saved Nathaniel's life and continue to help him improve.”