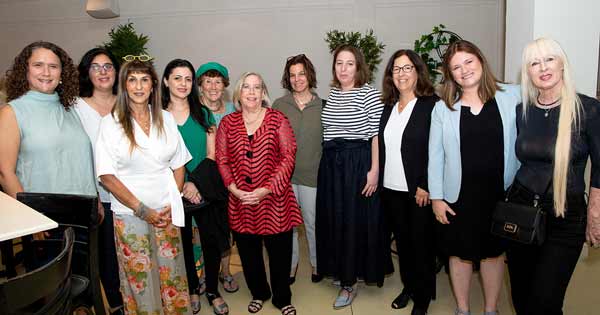 Women in Medicine: Hadassah National President Rhoda Smolow (in red) with guests at the August 9 event.

In Tel Aviv on August 9, Hadassah National President Rhoda Smolow and Hadassah Medical Organization (HMO) Board Chair Dalia Itzik convened a meeting of influential women in the Israeli health sector and government. Among the attendees were Minister of the Interior Ayelet Shaked, Knesset members including Knesset Health Committee Chair Idit Silman, and leaders from Israel's hospitals, health funds and the Ministry of Health.

Smolow spoke of Hadassah's pioneering role in establishing the excellent modern medical system in Israel and with Hadassah, the Women's Zionist Organization of America's ongoing commitment to catalyzing improvement. Itzik emphasized that the system cannot rely only on human excellence but needs more investment of resources by the government.

Major concerns discussed by the medical experts were the growing lack of Israel-trained physicians, nurses and auxiliary personnel, chronic shortages in government allocations and areas of inequality. Suggestions were made for pooling resources in the periphery, reducing the bottleneck in residencies, and providing care for Israel's aging population. There were numerous calls for revising an old system of reimbursement and regulation of hospital-based medical services.

"This was the first time such a conference was held and brought together women to make important positive changes in the health system," said MK Silman. "Thank you to Hadassah President Rhoda Smolow for initiating it."

The organizers received strong positive feedback and suggestions for working towards implementation of suggested improvements in different areas within the health system.