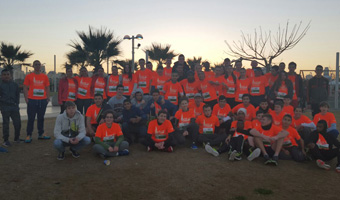 A year and a half ago the idea of starting a small running group came to mind. To the surprise of the staff, more and more high school students wanted to join.

In the beginning Hadassah's Youth Aliyah village, Shfeya, began by running five kilometers, but this year the team was prepared to raise the stakes and go for ten kilometers.

Currently the group has 80 runners. The athletes range from 7 to 12 grade. In addition to the student runners, youth counselors, young women army counselors, house mothers and teachers make up the rest of the Meir Shfeya team.