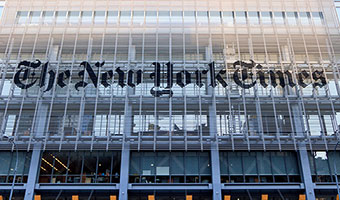 In response to the outrageous anti-Semitic cartoons in the NY Times, Hadassah, The Women’s Zionist Organization of America, Inc. (HWZOA), signed onto a letter initiated by the Jewish Council for Public Affairs (JCPA) on Monday, April 29, demanding a response from the newspaper.  Hadassah will not ignore such egregious attacks against the Jewish community.  The tragedy in San Diego this past Shabbat is proof that words have power to incite violence and take innocent lives.  Below is the letter from the JCPA that was signed by nearly a hundred organizations including HWZOA. We are proud to have been part of this collaborative pressure on the NY Times from the wider Jewish community.

“We, the undersigned organizations, were extremely disturbed by the Antisemitic cartoon published in the international edition of the New York Times on April 25th. While we appreciate the clarification and acknowledgment of responsibility, we contend that you continue to owe an explanation.

Moreover, it is difficult to fathom why, at a time of increasing Antisemitism and hate violence, the New York Times editors would have been so insensitive to the impact of such a cartoon. Were the editors not aware of the Pittsburgh shootings, the rise in hate crimes aimed at Jews, and the spike in Antisemitic rhetoric on both ends of the political spectrum, all of which are animated precisely by such depictions of Jews and Israel?

Specifically, we would like to know the following: 1. How did such a blatantly Antisemitic representation elude the editors? 2. What do you intend to do to make sure this doesn’t happen again? 3. What consequences do you intend to impose on the editors, cartoonist, and the syndicate?

We would appreciate an expeditious response. Thank you.”

As passionate lovers of Israel, we must stand together united against all forms of hate.  Am Yisrael Chai.