Hadassah Supports Choice and Zionism at the National Assembly Meeting 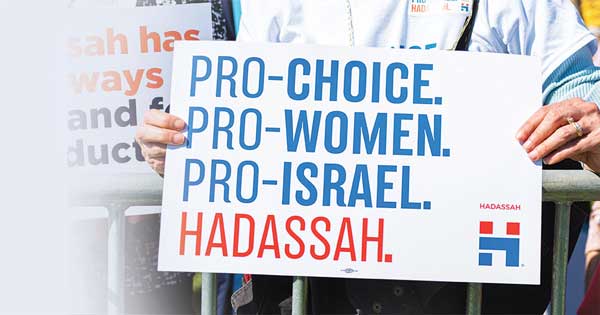 This year, as Israel celebrates its 75th anniversary of independence, Hadassah deepens our commitment to supporting the State of Israel as a beacon of democracy in the Middle East and a thriving homeland for the Jewish people with the newest policy statement, “Championing Israel’s Right to Exist.”

Through education, advocacy and discourse, Hadassah will continue to declare our Zionism with pride and empower others to publicly declare their support for Israel, while fighting hateful, untruthful accusations meant to demonize and delegitimize the state of Israel.

After the Supreme Court’s decision to overturn Roe v. Wade, continuing the fight for reproductive choice is more critical than ever before. With the latest statement, “Support for Choice in a Post-Roe Landscape,” Hadassah calls on policymakers at the local, state and federal levels to recognize reproductive choice as a fundamental women’s health issue and reaffirms our commitment to fight for protections for patients who seek reproductive health services as well as the health professionals who provide services and allies that facilitate access to care.‍

RSVP here for Hadassah’s webinar on January 23rd at 7 pm ET featuring choice advocate Heather Booth with doctors and policymakers on the ground in states where choice is under attack.