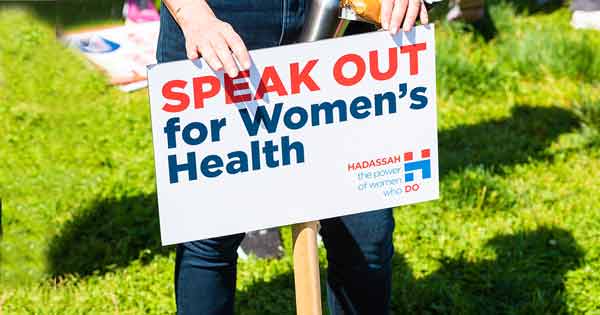 Reproductive rights were a clear winner at polls across the country. Hadassah advocates were integral in fighting a restrictive ballot measure that would have banned choice in Kentucky, as well as advancing measures to protect reproductive freedom in California, Michigan and Vermont.

This follows an earlier win in August where Hadassah members in Kansas mobilized against a ballot measure to remove state protections for choice -- which was rejected by voters.

California: In California, Hadassah members worked to support Proposition 1, the “California Right to Reproductive Freedom Amendment,” which amended the state constitution to protect the right to reproductive choice. In another win for reproductive rights, Californians overwhelmingly voted to pass this vital amendment.

Kentucky: Kentucky members made their voices heard in opposition to Constitutional Amendment 2, the “No Right to Abortion in Constitution Amendment” that sought to erase protections for choice in Kentucky’s constitution. Hadassah Louisville Chapter President Dr. Michelle Elisburg published an opinion in the Frankfort State Journal on how reproductive restrictions threaten patients, providers and religious freedom. Hadassah members in Kentucky and across the country participated in the Jewish community phone banks, informing voters  of the measure and the dangers it posed. Thanks to their continued efforts, this restrictive measure was rejected and Amendment 2 failed to pass!

Montana: A choice initiative on the ballot, Legislative Referendum 131 of the “Born Alive Infant Protection Act” that would have restricted reproductive choice, also failed to pass, thanks to the advocacy work of Hadassah members.

Vermont: Hadassah Northeast mobilized leaders and supporters in Vermont to vote for Article 22, the “Personal Reproductive Liberty Amendment,” which protects reproductive rights in Vermont’s constitution. With their support, the Vermont measure handily passed in a huge win for choice.

Hadassah has and always will stand for reproductive choice, which is essential for women’s health. Our work to protect reproductive rights both at the federal level and in states across the country is more important than ever.

Legislators are still considering bills that would limit and restrict reproductive freedom in such states as Minnesota, Ohio, Pennsylvania and others. Join the Hadassah’s Choice Action List for the latest on how you can help and check out the Hadassah for Choice page to learn how you can support choice in your state and on the federal level -- and stay updated on Hadassah’s efforts to protect reproductive freedom.

Thank you for advocating to make these significant advancements