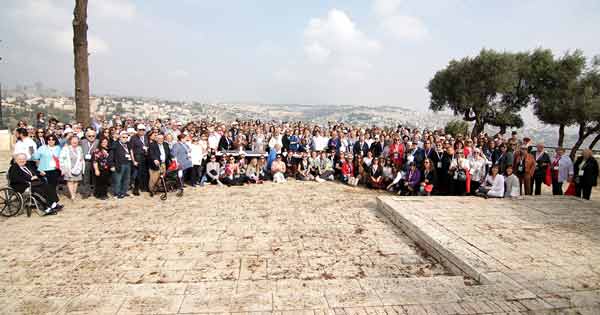 "Hadassah will continue to be a critical force in building an Israel that we all are proud of," said Israel President Isaac Herzog in his warm welcome to the 350-plus attendees at Hadassah's 100th National Convention, including volunteer leaders, donors, members, Associates and staff from the US and Israel. It was the "the best convention yet," in the words of many participants. Along with top Hadassah leaders, other VIPs who addressed convention-goers, reaffirming their commitment to Hadassah's vision of healing, included Israeli Minister of Diaspora Affairs Nachman Shai, US Ambassador to Israel Thomas R. Nides, Jerusalem Deputy Mayor Fleur Hassan-Nahoum, Israeli Health Ministry Director General Prof. Nachman Ash, Dr. Shoshy Goldberg of the Ministry of Health, MK Idit Silman and more.

For four full and spectacular days in Jerusalem, Hadassah's 100th National Convention inspired, telling the stories of the people whose lives we've transformed and those who make our impact possible, connecting attendees — younger and older — with Hadassah, the land of Israel and one another.

"Women are the greatest engine in social change, in my mind," said First Lady of the State of Israel Michal Herzog, recipient of Hadassah's first-ever Power of Esther Award, presented by Hadassah National President Rhoda Smolow. We agree. And we hope you’ll be inspired by these Convention highlights and that you’ll want to spread the word about the Hadassah pride, passion and purpose that defined our Convention – and infuses our work, every day.

Welcome Dinner
A sense of communal excitement filled the air at the Welcome Dinner, officially kicking off Hadassah's 100th National Convention. Representing 30 regions of Hadassah, the spirited and joyful reunion event started with a lively hora. “I want you to forget all the regions that you belong to,” said Hadassah’s 100th National Convention Chair Joyce Rabin in her welcome, “because for the next three days, we are one region. It’s called Hadassah Yerushalayim. We are together in Israel.” Leaders from across the US and Israel were welcomed from the podium: Convention honorary chairs (Hadassah past national presidents), Hadassah Medical Organization leaders, incoming and current region presidents, Evolve Women, convention committee members, Associates and Hadassah staff. Everybody had their moment to shine.

Hadassah National President Rhoda Smolow expressed her aspiration for attendees: “I hope by the end of the three days you will have even more passion, even more pride, understand your purpose and what you do for Hadassah and why you do it.” Closing out the evening program, Hadassah CEO Naomi Adler thanked the “unbelievable” Hadassah professional team — staff and volunteers — in the US and Israel who took on, and successfully pulled off, a truly unforgettable Convention. A high point of the evening was a timely talk by senior political analyst Daphna Liel, anchor of Israel’s Channel 12 News, who shared insights about events unfolding in Israel.

Associates Happy Hour
After a pre-convention trip filled with culture, history, food and fun — including guided tours of ANU: Museum of the Jewish People, Old Jaffa and the delights of the Levinsky Market — the Hadassah Associates hosted a post-welcome dinner happy hour at the Inbal Jerusalem Hotel, a celebration of our Associates, the men and affiliates who support and help advance Hadassah healing. The event provided a chance to connect with one another over delicious food and drinks as they shared their experiences from the trip and their work with Hadassah.

Haas Promenade Event
Tuesday began with live music and a powerful rendition of Hatikvah under the Israeli morning sun at a challah-centric opening event at the Haas Promenade, overlooking the Old City of Jerusalem. Hadassah National President Rhoda Smolow and CEO Naomi Adler led members in joyous dancing. The promenade traces the route of an ancient aqueduct that carried water from Solomon’s Pools, south of Bethlehem, to Jerusalem, with the Mount of Olives visible in the distance.

Hadassah’s Pride
The exciting and beautifully produced opening morning program at the Jerusalem Theater, Hadassah's Pride, paid tribute to Hadassah's historic commitment to the Hadassah Medical Organization and Youth Aliyah, with a focus on today’s impact. Emceed by Dr. Hila Korach, physician, Israeli journalist and television host, the event featured performances by singer-songwriter Michal Geva, singer-songwriter Eli Huli and pop and R&B star Shiri Maimon, as well as moving music from The Hebrew Choir from Dimona. At the heart of the show, and dispersed throughout, was a diverse representation of the millions of women, men and children who have benefitted from Hadassah’s efforts.

Heft and gravitas were added by speeches from Nachman Shai, Israel’s Minister of Diaspora Affairs; Dalia Itzik, chair of the HMO Board of Directors; Hadassah National President Rhoda Smolow and HMO Director General Prof. Yoram Weiss, all of whom spoke to Hadassah’s mission, aptly summed up by the emcee: “At Hadassah, we are constantly striving to heal our world. Here’s to the next 100+ years of world-changing, impact-bringing, healing and justice for all.”

Behind the Scenes at Hadassah Hospital Mount Scopus
Convention attendees had the chance to visit Hadassah Mount Scopus. In recent years, several departments at Hadassah Mount Scopus have been re-imagined, thanks to the generosity of Hadassah donors who have enabled construction projects including the Rady Mother and Child Center, as well as our new Pediatric Emergency Room, Cardiac Catheterization Center and state-of-the-art 132-bed Rehabilitation Center – the only facility like it in all of the Jerusalem area.

Evolve: The Next Generation Dinner
One thing was clear at Convention: Hadassah's efforts to engage amazing younger women are working, and their presence was palpable — and welcome. In addition to a pre-Convention tour, nearly 40 came together for a special Evolve dinner at Piccolino in the historic Nahalat Shiva neighborhood, including Hadassah's Evolve Leadership Fellows, the cohort of young members from across the country who will lead the next generation at Hadassah. While enjoying a kosher Italian dinner, attendees relished the camaraderie of being among like-minded women who share their commitment to making a positive impact on Hadassah’s future and hearing from both Hadassah National President Rhoda Smolow and Hadassah CEO Naomi Adler.

Founders Dinner
The Hadassah Medical Organization was at the heart of the Founders Dinner, where esteemed donors heard the kinds of incomparable stories about HMO doctors and patients that demonstrate what makes HMO stand out from the rest. Dr. Tamar Perri, director of the Gynecologic Oncology Department, and Dr. Rivka Brooks, a founding director of the Pediatric Intensive Care Unit, talked about their lifesaving work, sharing inspirational patient stories. Among them was Dr. Brooks herself, who Dr. Perri had treated for ovarian cancer. Dr. Joshua Schroeder, senior spine surgeon, told of how his team saved a young girl from becoming a paraplegic after a life-threatening car accident. Remarks were also made by Hadassah Chair of Major Gifts Carol Rotenberg, Hadassah Chair of the Society of Major Donors Clara Gillman, Hadassah National Vice Coordinator of Philanthropy Ruth Ann Freedman, and Hadassah National President Rhoda Smolow, who said, “The healing environment, the people we bring together, the examples we set, the lives you all touch and save ­— this is what we’re all about. This is the work of our hands and our hearts.”

Meir Shfeyah Youth Aliyah Village Tour / Burt Krull Dedication
The melodic sounds of student musicians, singers and the renowned Meir Shfeyah Mandolin Orchestra welcomed visitors to their Meir Shfeyah Youth Aliyah Village tour. Following remarks about Shfeyah’s Centennial by Past Hadassah National President Marcie Natan, Ambassador-at-Large Barbara “BG” Goldstein, and Meir Shfeyah board chair Eli Wagner, attendees learned about Shfeyah’s enriching Joy of Judaism program. Then, in an emotional moment, participants joined Burton “Burt” Krull for the unveiling of a plaque in recognition of his generous gift, made on behalf of his late wife, Alma. “My wife, on her dying bed, said, ‘This is what you have to do with Hadassah,’” said Krull. The plaque hangs outside a building that now houses teachers’ offices and the setting for one-on-one sessions between teachers and struggling students. The tour continued with visits to classrooms, the horse farm, Deborah B. Kaplan swimming pool, Nancy Falchuk Enrichment Center, Marcie Natan Dining Room, Marlene Post Health Center, farm and dorms. A bonus: getting to purchase bottles of premium wine from the Shfeyah Winery.

Seeing the Future of Medicine Unfold at Ein Kerem
Over the course of Convention, hundreds of supporters toured Hadassah Hospital Ein Kerem, where the reality of shared society is clear in every corridor, from the patients, doctors and nurses, to the Muslim prayer rugs for visiting families and the Chagall Windows in the Abbell Synagogue. Visitors learned from top Hadassah doctors about their remarkable medical advances. For many, a highlight was donning hardhats to see the transformation of the iconic Round Building, where the expansion is slated to shift to Phase 2 in December 2022, made possible by the generosity of its Hadassah supporters.

‍Hadassah Honors: An Evening of Excellence in the Spirit of Henrietta Szold
Hadassah Honors was a Convention highlight, honoring two dynamic women who epitomize the power of women who do. First Lady of the State of Israel Michal Herzog was presented with Hadassah’s first-ever Power of Esther Award by Hadassah National President Rhoda Smolow. “Women are the greatest engine in social change, in my mind,” she said in her acceptance speech. Past Hadassah National President Marlene Edith Post received the Henrietta Szold Award, Hadassah’s highest honor.

“My personal family and the Hadassah family are the two pillars on which my life stands... Our major purpose is to care, to care about all people,” she said upon receipt of the award from Past Hadassah National President Ellen Hershkin.

Following the awards portion of the event, the crowd was brought to its feet and everyone joyfully sang along to a surprise performance of “Kol Ha'olam Kulo” (Gesher Tsar Meod) for Marlene before filling the aisles for a spirited hora to a performance by Yehoram Gaon, Israeli singer, actor, director and TV host. The celebratory evening was elevated by even more spectacular entertainment from Marina Maximilian, Israeli singer-songwriter and actress, with The Israel Camerata, Israel’s leading chamber orchestra, and Lior Suchard, Israeli mentalist, and by the participation of distinguished guests Hadassah Honors Program Chair Sara Aronson, US Ambassador to Israel Thomas Nides, and Tamar Ish Shalom, Israeli journalist and television host, who served as the evening’s emcee.

‍"Women are the greatest engine in social change, in my mind," said First Lady of the State of Israel Michal Herzog, recipient of Hadassah's first-ever Power of Esther Award, presented by Hadassah National President Rhoda Smolow. We agree.

A Special Delivery: From Ohio With Love