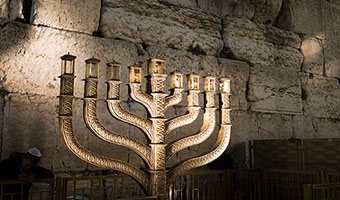 Third Night
All of Jerusalem is hurrying to get candles ready for Hanukkah and Shabbat. I'd like to take a moment to recognize our 14 Meir Shfeyah students plus staff who are in Ethiopia this Shabbat Hanukkah. Remember that Meir Shfeyah is a residential Youth Aliyah village between Tel Aviv and Haifa. At-risk teens from immigrant and troubled families get a new future through the devoted staff, with a lot of extracurricular activities sponsored by Hadassah. About 40 percent of the children come from Ethiopian backgrounds, and the Hanukkah trip focuses on pride of heritage. The participants, not all from Ethiopian backgrounds, gain a new appreciation for the Ethiopian Jewish culture and the hardships of immigration. Yael is one of those students. She also took part in the Hadassah-sponsored Eshet Hayil program, which bolsters the self-esteem and Jewish knowledge of the teenaged girls. On the first night of Hanukkah Yael had an emotional meeting with a cousin who still lives in Ethiopia and yearns to come to Israel. The Jews of Ethiopia practice a strict form of Judaism, but don't know about Hanukkah, which took place in the second century BCE, after they'd lost contact with the major Jewish centers. Because Yael took part in the Eshet Hayil program, she could explain Hanukkah to her cousin. They lit candles together. Let's think of them as we light candles tonight with pride in Hadassah's long history of devotion to Youth Aliyah.
Shabbat Shalom and Hanukkah Sameach!

Second Night
On November 17, Ebenezer Horaling, 35, was on his way to work as a custodian at a boys’ elementary school in Gush Etzion. When he got off the bus, a terrorist driving a van rammed him, throwing him in the air and knocking him to the ground. He was in critical condition with a fractured neck and head injury. The team in Hadassah's Intensive Care Unit led by Prof. Vernon Van-Herdeen fought hard for his life. Ebenezer and his wife, Miriam, plus their extended family made aliyah in 2006 from North East India, as part of the group called Bnei Menashe, who have rediscovered their Judaism. Ebenezer and Miriam came to Israel holding the hands of one toddler son. Now they have six beautiful children. The oldest will be Bar Mitzvah in a month. His name is Magen Yisrael, Defender of Israel, like a Maccabee. The good news is that Dad Ebenezer is out of danger, awake, and beginning therapy. The Bnei Menashe believe they are remnants of the ten lost tribes. They are making their way home to Israel. The miracle of the ingathering of nations goes on. Savor the joy of being part of this, though Hadassah, as we light our candles tonight.
Hanukkah Sameach from Jerusalem.

First Night
Many of you have met Dvir Musai on visits to Hadassah Hospital in Jerusalem. Dvir was nearly 13 when he stepped on a landmine left by a terrorist at a farm where his class went to pick cherries. I remember Chief of Surgery and Trauma Prof Avi Rivkind putting his head down on his desk for a moment, a rare reaction from the experienced and famous surgeon. "Dvir will be our patient for the rest of his life," he said. Indeed, Dvir celebrated his bar mitzvah in a Hadassah hospital bed, and has undergone more than 30 operations. Now, age 29, he remains a Hadassah patient, but he has also has managed to serve in the IDF's anti-terror unit, to marry his love Orly, and to welcome his two beautiful children into the world, at Hadassah Hospital, of course. A believer in giving back, he works as a guide and coordinator of Hadassah's Herzstein Heritage Center at Hadassah Hospital Ein Kerem. Yesterday, our beloved Dvir spoke at the Israel Knesset in the name of all of Israel's terror survivors. "Our bodies were broken, but our spirit overcame, " he said. What a beautiful way to begin the holiday of light. Dvir means the holiest part of the Temple, the rededication of which we celebrate when we light the menorah. We're so proud to you, Dvir.