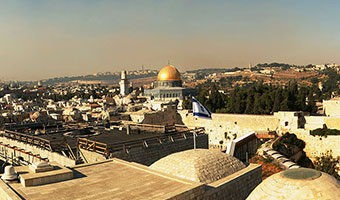 Hadassah, the Women’s Zionist Organization of America, stated: We send prayers of consolation to the family of 16 year old Shira Banki. Her parents have nobly donated her organs so others may live. May her memory be a blessing for all Israel and may we continue to condemn such violent attacks.

Thousands of marchers in the annual Jerusalem Gay Pride Parade were turning into Keren Hayesasod Street when assailant Yishai Schlissel lunged into the crowd, stabbing marchers. Four of the victims were rushed to Hadassah Ein Kerem. Shira Banki, 16, was bleeding so profusely that the ambulance took her to the nearest hospital, Shaare Zedek. The next day, she was transferred to Hadassah Medical Organization because of edema, brain swelling and ischemia, insufficient blood flow. Neurosurgeon Moni Benifla said, "Sadly, it was too late, and this beautiful young girl died."

Jerusalem Chief Rabbi Aryeh Stern, who condemned the terror attack, is shown in this article visiting a patient at Hadassah Ein Kerem. All patients have subsequently been discharged.