If Only There Were Another Dalia 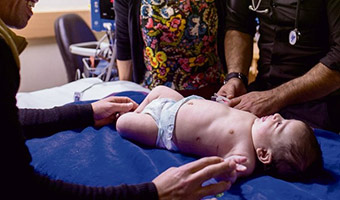 Known on the Palestinian street as “Malak,”the Arab word for angel, Dalia Bassa, the Civil Administration’s Health Coordinator at the Coordination of Government Activities in the Territories, helps to save the lives of hundreds of Palestinian children by facilitating access to Israeli medical care—often at Hadassah Hospital.

Dalia’s cell phone number is passed down by word of mouth and she takes phone calls at all hours of the day and night. She has two cell phones, actually—a regular Israeli one, and one which can receive calls from anywhere in the Palestinian Authority (PA). She carries both devices with her wherever she goes, allowing her to immediately help with any case in which a Palestinian's life is in danger and cannot be saved at a PA hospital.

Take the case of baby Moussa, for example. Dr. Ibrahim Abu Zahira, who is in a training program at Hadassah, first saw the baby at his clinic in Hebron. The baby barely had a pulse. Finding that the baby had a birth defect, he understood that Moussa needed to be operated on immediately. He called Prof. Azaria Rein, head of Pediatric Cardiology at Hadassah, who was his mentor at Hadassah. Once Prof. Rein confirmed the diagnosis, Dr. Abu Zahira called Dalia, who quickly arranged for Moussa to be transferred to Hadassah. As Moussa’s father, Dirar recalls: “Dalia obtained all the permits and organized the transportation. Everything went rapidly and smoothly.  It was amazing.  She also came to visit Moussa immediately after the operation.”

Only 15 hours had passed from the moment Moussa’s defect was diagnosed until he was operated on at Hadassah.

Officially, Dalia’s job is to coordinate between the Palestinian and Israeli health ministries. But, in reality, her role encompasses so much more.

Read the full story of Dalia’s almost 50-year impact, at Ynetnews on line