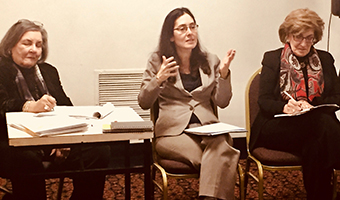 "I am very humbled. My own country is celebrating its 70th anniversary — we are a younger sibling to these organizations that have been around for a hundred years or more," said Israel's Deputy Ambassador to the UN, Noa Furman, at a United Nations event presented by Hadassah and World ORT.

The March 14 event, "Empowering Rural Women and Girls Through Education, Training and Health Care," was part of the UN Commission on the Status of Women (CSW) two-week session, the 62nd Annual Forum.

"We must keep doing this if we want to make the world a stronger place for women," said Hadassah UN Team Chair Ruth Cole during her opening remarks, touching on the ripple effects of the #MeToo movement around the country — and in other countries as well — and how the global work of NGOs and Israeli organizations — including Hadassah, World ORT and MASHAV: Israel's Agency for International Development Cooperation — must continue.

Panelists spoke of the many ways Israel and Israel-tied organizations are playing an international role in empowering women and girls in developing countries. World ORT International Cooperation Director Celeste Angus spoke about creating sustainable livelihoods for thousands of women - and men, stressing local collaborations and international partnerships in a hundred countries.

A former medical officer for the Division of Disability Policy for the Social Security Administration and retired assistant professor, Dr. Ezrine spoke of the Hadassah medical teams who "ensure that care has no boundaries," and the nurses who are bringing Jewish and Palestinian nurses together to "create communities of compassion and understanding."

"The work we do," Dr. Ezrine said of HMO, "enriches lives around the world." Consider, for example, the students who come to the Hebrew University-Hadassah Braun School of Public Health, who then bring their medical training back to their home countries, including Kenya, Cameroon and Myanmar.

Projects like ART Joy Love combat HIV/AIDS in pediatric orphanages, starting in Kenya and Ethiopia and now also helping children in Mumbai, India and Uganda. And the Hadassah Ophthalmology Department has been sending eye doctors to African countries to treat eye diseases for more than 50 years including Liberia, Tanzania, Rwanda, Ethiopia, Kenya, Malawi, and Swaziland.

Ambassador Furman, deputy permanent representative at Israel's mission to the United Nations, focused her remarks on the Golda Meir Mount Carmel International Mashav Center, a moving tribute to the legacy of Israel's first female leader and the third woman in the world to lead a modern nation. "After serving as foreign minister, Golda Meir came back, saying, 'Here are all these countries just like us, we should try to share whatever we know.' Today, Israel represents one of the few nations that has so quickly transformed itself from a developing country to a developed country."

When it comes to gender equality, Amb. Furman said it's important not just for women to be active but for all of society. When women have economic independence, that benefits the community and the family — and makes a tremendous change.

Established in 1946, the CSW is the principal global intergovernmental body exclusively dedicated to the promotion of gender equality and the empowerment of women. In addition to Ruth Cole, Hadassah's UN Team comprises Vice Chair Ruth Grossberg and On-Site Representatives Rae Gurewitsch and Judy Padolf.

A lively Q & A moderated by Ruth Grossberg followed the panel, with attendees from countries including Canada, Nigeria and New Zealand. At the end, one audience member, close to tears, spoke of how moved she is by Israel's humanitarian efforts - and Hadassah's. This is the Israel she knows and loves.