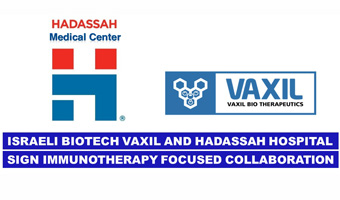 Vaxil Biotherapeutics Israel has signed an immunotherapy collaboration agreement with the Hadassah Medical Organization, intended to enhance the Company's immunotherapy platform, including its lead product, Immucin™.

"I am a strong believer in Vaxil's immunotherapy platform,” relates Prof. Michael Shapira, who is spearheading the collaboration and joining Vaxil’s Scientific Advisory Board. “I have spent years following Immucin's progress, and have been fortunate to witness the promising potential both in cancer patients and in the laboratory. Hadassah is excited to be embarking on this collaboration and partnering with Vaxil's scientific team."

Through this collaboration, Hadassah cancer patients and healthy volunteers will provide tumor samples which will be analyzed in conjunction with Vaxil's immune therapies. They will also be used in Vaxil’s investigation of potential combination therapies. The company notes that Immucin has the potential to be a very strong immunotherapy, whether as a stand-alone treatment or possibly in combination with other products.

The Vaxil and Hadassah scientists will further examine the nature of immune response to its immunotherapy in hematological patients, specifically those that are in remission from multiple myeloma and leukemia. Investigations and analysis will take place primarily at Vaxil's laboratory, using the company's fluorescence-activated cell sorting machine and other facilities. Immucin has already completed a successful Phase-I/II clinical trial, under the direction of Prof. Shapira, and will now be positioned toward a larger Phase II trial. The previous trial demonstrated the safety of Immucin and established its potential to elicit a novel specific cellular response against a highly prominent cancer target entitled MUC1-SP—a target that is present on 90 percent of all human cancers, but has proven elusive in terms of optimal treatment protocol.

This Vaxil-Hadassah partnership will investigate Immucin’s mode of action and, in turn, create an optimal design for its next clinical trial, to be launched in 2017. Learn more about immunotherapy and Immucin at https://www.youtube.com/watch?v=XhEwj6Ue13s