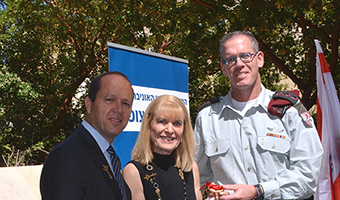 "I stand here in the footsteps of the giants whose vision and courage to build Zion continues to guide our path," said Hadassah National President Ellen Hershkin.

On this particular sunny morning on Jerusalem’s Mount Scopus, the mood was jubilant, the gentle breeze imbued with meaning as the crowd came together for the official celebration of the return of the Mount Scopus hospital to Hadassah after the Six-Day War.

With Mayor Nir Barkat of Jerusalem and Hagay Frenkel, Chief Medical Officer of the IDF Central Command, Ellen re-enacted a historic moment in Hadassah history, the return of the keys to Hadassah Mt. Scopus. Yet after standing abandoned for 19 years. In 1967, then Hadassah President Charlotte Jacobson ebraced the work ahead as a challenge, in typical Hadassah spirit.

The sense of history – and Hadassah’s place in it – was palpable, coming at the end of days of celebration, including the Jerusalem Day Flag Parade, which drew tens of thousands. Standing in for Hadassah members from around the United States were two dozen women and men on Hadassah’s O Jerusalem 50th Reunification Mission, including chairs Carol Rosenthal and Aileen Bormel.

Hadassah Director General Zeev Rotstein began the ceremony with a prayer in memory of the 78 members of the Hadassah family — doctors, nurses, patients, students, soldiers — who were murdered on their way to Mount Scopus on April 13, 1948.

Wearing a symbolic gold key on his lapel, birds chirping behind him in the Mt. Scopus garden, Jerusalem Mayor Nir Barkat shared his own memories as a boy growing up in Jerusalem during the war. As mayor, he stressed Hadassah’s past and future contributions to the city. “Fifty years ago,” he said, “the country needed you and your contributions and your investments, and it made a big, big difference. That importance hasn’t changed — it may have shifted. The challenges now are as big to the future of the city as they were 50 years ago. I don’t think there’s any bigger and better partner to Yerushalayim than the Hadassah [Medical] Organization.”

“It’s not just historic, it’s part of our future,” said Prof. Rotsten, sharing his vision for the next 50 years: a strong Hadassah in a strong Jerusalem.

Speaking of Hadassah Hospital Mount Scopus, the late Prime Minister Yitzhak Rabin once said about: “Its name will forever be linked with the agonizing battles for freedom and the reunification of Jerusalem.”

Today, it stands as a beacon of healing, a bridge to peace.

Celebrate with us – watch videos, see our photo galleries, spread the word, and consider making a donation to advance our lifesaving work. Thank you!