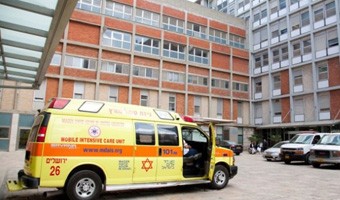 Lead No. 1: October 23. In her car seat, Tahel Sofer (no relation to me), a pretty three-year-old with big brown eyes, smooths the hem of her pink party dress saved for this Shabbat. Her long dark hair is pulled up artfully around the top of her head “like a princess.”

Sitting next to her in the back seat of the Ford Focus are brothers Matan, nine, and Tair, 11, also showered and dressed for Shabbat, their cowlicks still damp. Their father, Uriel Sofer, is driving, and their mother, Sigal Sofer, is in the front passenger seat. The drive from their home south of Ashkelon to their cousins’ house should take about an hour.

Lead No. 2: October 23. In her car seat, Tahel Sofer (no relation to me), a pretty three-year-old with big brown eyes, smooths the hem of her pink party dress saved for this Shabbat. Her long dark hair is pulled up artfully around the top of her head “like a princess.” Sitting next to her in the back seat of the Ford Focus are brothers Matan, nine, and Tair, 11, also showered and dressed for Shabbat, their cowlicks still damp. Their father, Uriel Sofer, is driving, and their mother, Sigal Sofer, is in the front passenger seat. The drive from their home in Nitzan – the town between Ashdod and Ashkelon populated by evacuated settlers from the Gaza Strip town of Neveh Dekalim – to Uriel’s sister’s home in Beit El in Samaria should take about an hour.

If the terrorist attack described in the following paragraphs is unfamiliar to you, Sigal Sofer thinks that’s because the second lead has dominated.

This family is about to be attacked in one of those areas labeled by the Europeans as a country outside the boundaries of the State of Israel. What takes place “somewhere out there” in the territories has less impact in the media and in the consciousness of the nation.

We have here a hierarchy of sympathy based on where you are assaulted.

Let’s take a look at what happens to the Sofer family.

FRIDAY AFTERNOON. They have almost reached Beit El. Because their sedan is too small to take their whole family, two of their teenage daughters have traveled by bus. They’ve already arrived.

Uriel and Sigal are talking quietly because the children in the back have fallen asleep. It’s one of those rare quiet moments where parents of seven can catch up.

Out of the corner of his left eye, Uriel sees two masked men. There is no way to get off the road. Uriel presses his foot on the gas, but the terrorists have already pitched their flaming bottles toward the car. Two thuds, shattering glass and a fireball in the car. The combined propulsion of the throw and the car’s forward moment smashes the back window.

A Molotov cocktail – a bottle with a liquid, probably alcohol and oil with a rag stuffed in its spout – explodes when it hits Tahel’s car seat.

The three children wake up shrieking.

“Should I stop?” shouts Uriel. “No, no, no,” insists Sigal. The image of those murdered when they have stopped their cars needs to be balanced against the fear that the car will blow up. Tahel’s pink dress is on fire. Sigal bats the flames with her hands, saying over and over “not again, not again.” Uriel reaches back to crush the fire with his hands.

Down the road, they see soldiers on patrol. Uriel brakes. Sigal is out first, grabbing Tahel. She’s easy to pull out.

The straps on the car seat have all melted.

Lift your arms, she says. Sigal pulls the burning dress over her head, remembering how she cut the tag off this new dress and dressed her excited daughter earlier. Because her hair was done up, it didn’t catch fire.

The soldiers have ointments and blankets. The other children seem unhurt.

Sigal’s hands are blistered. Never mind, she says. But the ambulances take them all to Jerusalem, blaring away as they race for medical care for Sigal.

Uriel’s parents made aliya from Tunisia (independence 1956, Jewish community sixth century BCE). He was born in Netivot (founded 1956), studied in Yeshivat Yamit (established in the Sinai Peninsula in 1967, bulldozed in 1982, as part of the terms of the Israel-Egypt peace treaty) and then moved to Neveh Dekalim, the replacement community for the evacuees from Sinai, founded in 1983.

The couple met when Sigal was doing her National Service in Netivot and Uriel was home on vacation before the army.

After they were married, they moved to Neveh Dekalim and built a home among the palm trees on the sandy land of Gush Katif in the Gaza Strip. Six thousand mortars fell on Neveh Dekalim.

Their first two children were born a year apart. Sigal was wheeling them in a stroller when terrorists attacked her, stabbing her in the chest and kicking her, as she tried to protect the children.

“I screamed in a way I can’t even imagine, and guards came running and saved me,” she said.

The stab marks show beneath her collar bone. After a long recovery, she tried to put the trauma behind her.

In 2005, the government of Israel decided on a peace gesture of uprooting its own citizens from their homes in Gush Katif.

In Europe, the poverty and deprivation of the Arab Gazans was blamed on the presence of the farmer Jews. The Sofers’ family home was bulldozed. Within hours following the evacuation, Neveh Dekalim’s famed hothouses, a terrific source of food and income, were torn apart.

Sigal and Uriel and their six children moved to Nitzan, with many of their former neighbors. They rebuilt their lives, living at first in a double-width trailer called a caravilla. Uriel worked for a construction company, and Sigal became an administrator in a women’s Torah educational program. Tahel, their precocious seventh child, was born.

HOW TO label this event, Europeans? We have a family where grandparents on both sides left their Arab-majority places of birth to live as Jews in Israel.

Their Sabra children went to live in a community set up by the State of Israel as a replacement for a magnificent city destroyed for a peace agreement. They absorbed mortars and a terrorist attack.

They lost their home for a futile gesture of peace long forgotten by a world that still talks about occupation. They now live in a community in Israel proper that is a frequent target of rocket attacks.

But let us not forget that they were visiting their cousins in Beit El. If wine from the Beit El Winery or the doughnuts baked by lawyer Herbie Dan (from Memphis, Tennessee, established 1819 on land of the Chickasaw tribe) are sold in Europe, they can’t bear a “Made in Israel” stamp. Beit El is, of course, mentioned in the Bible (five billion copies, written around 1500 BCE), where Jacob, patriarch of the Jewish people, dreams of angels on a ladder.

“It’s horrifying to watch your child burn,” says Sigal, shuddering at the memory.

We’re talking in Tahel’s room in Hadassah-University Medical Center, listening to the personalized recording of Yuval Hamevulbal (Yuval Shemtov) sent to her by the children’s comedian who heard she likes him. He talks about the little heroine Tahel.

A helium balloon with a picture of Princess Elsa from the Disney movie Frozen bounces at the foot of the hospital bed.

The store where Sigal bought the pink dress has sent a replacement.

Once again, they are healing. The blisters on Sigal’s hands are peeling. Tahel’s skin grafts are taking. The plastic surgeon says the scars will fade but not disappear. Like an old label.