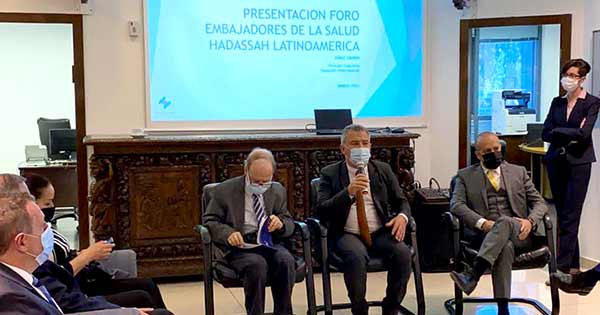 Caption (un-numbered jpg): The Latin American ambassadors at the inaugural meeting of the Hadassah Health LATAM Ambassadors Forum on March 18 at the Argentinian Ambassador to Israel’s residence in Herzliya.

Historically, HI has been actively engaged in leveraging the medical expertise of Hadassah to help foster a special relationship between Latin America and the State of Israel. In these extraordinary times, this initiative is a high priority since, unfortunately, the COVID-19 crisis is expected to be an ongoing challenge for Latin America for quite a long time.

The HI team, led by Jorge Diener, HI executive director, facilitated this meeting as part of HI’s mission to build bridges at multiple levels between Hadassah and both South American and Central American countries. The meeting concluded with a resolution stating that all participating embassies, representing their respective countries, will invite the Secretaries/Ministers of Health of their own country to an initial virtual conference, to be held in the near future.

“Now that Israel is getting close to the point of winning the battle over COVID-19,” Mr. Diener emphasized, “it is our responsibility to share our experience and to help other parts of the world where the end of the struggle is farther down the road. HMO, at the frontline of this battle in Israel, can continue to be a source of solutions and support.”

Ambassador Uribarri expressed his belief that “together we can do more than what each of us can do alone.” He added, “If there is an institution that can help us with this health emergency, clearly it is Hadassah.”

Working in parallel with the Ambassadors Forum is the recently formed LATAM Advisory Committee, comprised of influential leaders in the region, led by Rafael Zaga, chairman of Hadassah Mexico and a member of the HI Board of Directors. The committee, created by HI, includes representatives of the Jewish community leadership of Mexico, Chile, Uruguay, Paraguay, Peru, Brazil and Argentina. The goal of the committee is to create a special relationship with Hadassah’s hospitals within each of their countries.