Let There Be Water: Israel's Solution for a Water-Starved World 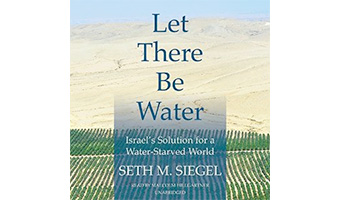 MAKING THE DESERT BLOOM: Most of us know that Israel transformed a largely parched land into gardens, forests and arable, habitable land. But few of us know the fascinating story of how Israel accomplished this feat. Based on meticulous research and hundreds of interviews with both world leaders and experts in the field, Seth Siegel tells the inspiring story of how this all came to be in Let There Be Water: Israel's Solution for a Water-Starved World.

Because of the scarcity of water, its isolation and its resourcefulness, throughout its history Israel has been a world leader in water management and conservation. In pre-state Israel as well as in the earliest days of statehood, the Zionist pioneers recognized the urgent need for water if the country was to flourish. David Ben-Gurion, Israel's first prime minister, issued the call to "make the desert bloom." In addition to heeding Ben Gurion's call to action, Israeli leaders have periodically also hoped the transfer of water technology might be a possible incentive for peace with the Palestinians and Arab states.

With sixty percent of the country a desert and despite a rapidly growing population, Israel has been jumping ahead of the water-innovation curve for decades.

Jewish inventiveness was born of political necessity. In the 1930s, most of the water in what was then known as Palestine came from shallow wells, and the infrastructure didn't exist to connect the country's disparate regions, which have wildly varying climates. There was water in the far north, but the Jewish population was concentrated around Tel Aviv, in the middle of the country. In the south lay the Negev Desert, which appeared "inhospitable to human habitation, a wasteland," Mr. Siegel writes. British colonial officials believed that Palestine could hold no more than two million people without going thirsty. The British White Paper of 1939 sought "to choke off Jewish immigration to Palestine" by limiting the number of new arrivals and claiming that the land simply could not support more inhabitants. It is interesting to note that there are now more than 12 million Jews and Arabs between the Jordan River and the Mediterranean Sea.

Zionist leaders dreamed up Israel's elaborate water system that proved the British wrong. For them, the Negev was a land of possibility. As Mr. Siegel writes, David Ben-Gurion "saw himself in a race against time to establish facts on the ground that would justify a recommendation by the UN commissioners to grant the desert territory to the new Jewish state."

Under British law, the Jewish pioneers were barred from establishing new settlements or farms. But the Zionists found a loophole. An earlier Ottoman law held that "no structure with a roof" could be demolished by the government. So under the cover of darkness, on the night after Yom Kippur in 1946, they set up 11 new farms in the northern part of the Negev and began drilling for water. They found it at one of the sites and transported the water to the other settlements using recycled pipes that the British had used to put out fires during the Blitz. "The discarded British pipes first used to frustrate Hitler's effort to terrorize the people of London now served to undermine British efforts to stymie Jewish settlement construction," writes Mr. Siegel.

The strategy paid off: The United Nations 1947 partition plan granted the Negev to the Zionists. Despite the protests of the British, U.N. investigators were persuaded that "the Land of Israel could have water resources nearly triple the proven amount then on hand."

Water remained a top priority for the new country's leaders in the decades that followed. In 1955, Israel established the Yarkon-Negev pipeline, the state's first major water development project, which carried water from Tel Aviv's Yarkon River to the Negev and brought "fifty thousand acres of desert land under cultivation." Four years later, the government passed a law, which made all water resources "public property subject to control of the State"—a policy that has held to this day. In June 1964, the National Water Carrier—a vast system of pipes, tunnels, reservoirs and distribution networks—unified the state. It wasn't cheap: "On a per capita basis, adjusted for inflation, Israel spent six times more building the National Water Carrier than the US did building the Panama Canal." That same year, Israeli Prime Minister Levi Eshkol met with President Lyndon Johnson about desalination during Israel's first official state visit to America.

Today desalinated water provides "the equivalent of ninety-four percent of Israel's household water." Israel Desalination Enterprises—initially a government creation, now a private venture—has also helped develop the largest desalination plant in the Western Hemisphere, in Carlsbad, Calif., as well as major projects in China and India. In addition, Israel recycles about 85% of its sewage. Incredibly, entrepreneurs have discovered how to make money out of sewage by selling skimmed-off oil for reprocessing in industrial applications.

Israel's national unity and economic vitality are, in part, the result of a culture and consciousness that understands the central role of water in building a dynamic, thriving society. By boldly thinking about water, Israel has transformed the world of agriculture through innovations like drip irrigation, creation of smart seeds for drought-friendly plants, and careful reuse of highly treated waste water. Israel has also played a leading role in the emerging desalination revolution.

Today Israel has solved its water problem and has an abundance of water, which is supplied to the Palestinians and the Kingdom of Jordan daily.

Beyond securing its own water supply, Israel has also created a high-export industry in water technology, a timely example of how countries can build their economies while making the world more hospitable.

Because Israel has always viewed water as a valuable, sacred resource, children are taught in elementary school the value of saving water through turning off water in the shower while soaping, shutting off the faucet while brushing their teeth and the importance of the dual flushing system for toilets. The author believes that part of the Israeli mindset is not to take water for granted. He believes people in Israel have a sense of limits, which helps to keep them from running out of water.

Siegel believes Israel is a model for the rest of the world as they have the most sophisticated water resource management internationally. Management of water, he believes is apolitical. He recommends charging the real price of water, ensuring funds for technology and infrastructure. As citizens, Siegel believes we should pay for the water we use and we can have as much water as we want. He believes the water system should be price driven. Regarding a master plan for communities, he believes it is a matter of creating options. For instance, if we want green lawns then we need to pay for our water. Currently Israeli citizens pay 3/4 of a penny for each gallon of water and this system can be applied elsewhere.

"Israel is a source of technology and opportunity with major past successes," Siegel says. "Not everything Israel does is right for every country or community, but her problem-solving skills related to water, long range planning, educating people about water resources and conservation and utilization of water fees for water infrastructure and technological innovation are all relevant to people globally."

With hardly a day without a water-crisis story somewhere, Let There Be Water offers prescriptions on how countries, cities, and businesses can avoid dire water shortages.

Among those who praised the book, Michael Bloomberg said, "If you are worried about global water shortages—and you should be—read this book. Seth Siegel brings an urgent message of how the world can save itself using remarkable techniques and technology developed in Israel. Let There Be Water is essential reading. I highly recommend it."

About the Author
SETH M. SIEGEL is a lawyer, activist, writer, and successful serial entrepreneur. His essays on water and other policy issues have appeared in The New York Times, The Wall Street Journal, The Los Angeles Times, and in leading publications in Europe and Asia. Siegel is a member of the Council on Foreign Relations. He is a highly sought after speaker on a range of topics including water policy, Middle East politics, and national security. He is married and lives in New York City.

This articles are part of the June/July 2016 edition of Women Who Learn. To obtain a PDF version of the full edition, email us at jewisheducation@hadassah.org.