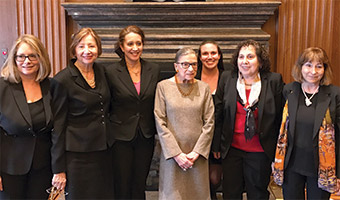 Hadassah mourns the passing of Supreme Court Justice Ruth Bader Ginsburg, z"l, on September 18, the first night of Rosh Hashanah, from metastatic pancreatic cancer. Born in Brooklyn, NY, in 1933, Justice Ginsburg — a life member of Hadassah — spent a lifetime breaking boundaries and championing women’s rights, equality and justice. Today, thanks to her relentless efforts, the American legal system views women as equal under the law.

"The demand for justice runs through the entirety of Jewish history and Jewish tradition," she once said. A trailblazer with one of our nation’s sharpest minds and a warm heart, a powerhouse with a sense of humor, an inspiration and an icon, she repeatedly credited Hadassah founder Henrietta Szold as being an inspiration to her, one of "the two Jewish women, raised in the United States of America, whose humanity and bravery inspired me" and who she credits for being a "Zionist even before Theodor Herzl came on the scene."

"Ginsburg admired Szold's eloquent rejection of a male offer to say Kaddish for her mother when she died," wrote Hadassah Magazine Executive Editor Lisa Hostein in  December 2019. "When Ginsburg's own mother died, right before her high school graduation, Ginsburg had been told that, as a woman, she couldn't recite Kaddish."

In 1993, Ginsburg took her seat on the Supreme Court bench. Yet her legal legacy began much earlier; for two decades she argued cases that attacked the systemic sexual discrimination embedded in the law and leading the ACLU's Women's Rights Project from its founding in 1972.

"Women's rights are an essential part of the overall human rights agenda, trained on the equal dignity and ability to live in freedom all people should enjoy," she said.

Ginsburg was the first Jewish woman — and the second woman — to sit on the Supreme Court bench. And for 25 years, she didn't miss a day when the court was in session, until she had two cancerous nodules removed from her left lung in late December 2018. On her first day back at Supreme Court in January 2019, she took time to offer her congratulations to the newest members of the US Supreme Court Bar, 14 members from the Hadassah Attorneys Council, as she has almost every year since the council began its Swearing In Program two decades ago.

Ginsburg left us during the High Holidays, and among what she considered to be her "big achievements" was getting the court not to sit on the first day of Rosh Hashanah and on Yom Kippur, along with the aid of Justice Stephen Breyer.

During the traditional period of prayer, reflection and atonement, many may find in her words during the Ten Days of Awe, a reminder that "we are taught to do right, to love mercy, do justice, not because there's gonna be any reward in heaven or punishment in hell. We live righteously because that's how people should live."

Asked in a 2015 interview how she would like to be remembered, she said: As "someone who used whatever talent she had to do her work to the very best of her ability. And to help repair tears in her society, to make things a little better through the use of whatever ability she has."

Our thoughts are with her family. May her memory be a blessing. Join us in honoring her legacy.