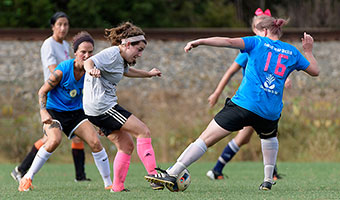 Two seemingly disparate universes — soccer and Hadassah — came together in North Carolina for the fifth consecutive year to raise awareness about breast cancer and raise funds for Hadassah Hospitals.

Hundreds turned out — families, dogs, fans in pink — to support Hadassah and cheer on the players at the 2018 Celebrate the TaTas Annual Soccer Tournament for Women.

This was the most successful tournament yet, despite the humidity: $10K raised, 8 soccer teams, with 4 states sending players for 2 days of family-friendly fun during the first weekend in October. This year at Winston Salem’s Hine Park Soccer Complex, a professional DJ kept the crowd energized while on the field, and professional referees flown in by the Florida Referee Association called the shots.

Celebrate the Tatas started, says tournament founder and co-chair Talia Goldman of Hadassah Charlotte, with a “crazy idea” —  an event tied to painting women’s breasts to help fundraise for breast cancer research at the Hadassah Medical Organization. Since then, Hadassah Charlotte’s Celebrate the Tatas has grown significantly, and now includes “painting days” (when artists paint women’s torsos), free mammograms, the soccer tournament, and a big fundraising event. Today, there are Hadassah chapters around the country that host Celebrate the Tatas breast-painting events, which Talia has worked actively to help succeed.

An Israel expat and former New Yorker, Talia says she felt lucky to find herself in such excellent company when she moved to Charlotte 13 years ago. “I love the women at the Hadassah chapter in Charlotte. They were warm and embracing, and they gave me the support” needed to make Celebrate the Tatas succeed.

Among women in the US, breast cancer is the second most deadly cancer, causing 40,000 deaths each year. Around the country, Hadassah chapters are educating their communities through programs like Check It Out, Best Strokes, the Uplift Project, and more.

Like Talia, many people who play a vital role in organizing Hadassah breast cancer programs have felt the effect of breast cancer on their personal lives. "My mother has had multiple cancers — including breast cancer. Today, she's alive and fabulous. At one point, I realized that I have those genes, and I have a daughter," Talia says. "So much of this is about education." She realized that she could make an impact, “could do something that was a little empowering, that could add a little glitter."

Through their partnership, the North Carolina Adult Soccer Association and Hadassah Charlotte have raised more than $30,000 over the past five years. "All the money goes to Hadassah Hospital and breast cancer research." During the Tournament, "Everybody rolls up their sleeves and gets dirty," says Talia, co-chair of the 2018 tournament, along with Alex Vidaurri, the Women's Commissioner for North Carolina Soccer. As an organizer and fundraiser, Talia brought in co-sponsors and donations — from the food the athletes ate to the pink trophies the winners took home.

While this might sound like a full-time job, Talia's Hadassah volunteering is a labor of love. Professionally she works far from the soccer field as a development and event coordinator at the Stan Greenspan Center for Peace and Social Justice at Queens University in Charlotte.

One of the perks of being so involved with the soccer tournament? "I feel like a make believe athlete!"

She adds: "I'm committed to Israel and committed to breast cancer, so Hadassah is a natural connection for me."