On Our Issues: Passionate, Not Partisan 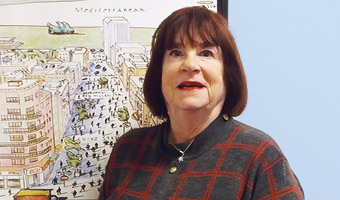 "Charitable nonprofits embody the best of America," begins a report from the National Council of Nonprofits, stressing the power of nonprofits to foster civic engagement. "They provide a way for people to work together for the common good, transforming shared beliefs and hopes into action. They give shape to our boldest dreams, highest ideals, and noblest causes."

What unites us defines us at Hadassah, where we're 300,000 strong with members across the nation, from the far right to the far left. As our country, Israel and our world face crises and challenges, what unites us is more important than ever.

As the nation's largest Jewish women's organization — and by far its largest Zionist organization — civic engagement is an integral part of our broad-based efforts, rooted firmly in our history and mission.

In the American Jewish community, in Washington, even at the United Nations, we're a much-needed voice for women and Jews, for Israel and Zionism, for health and healing, and for those who need us. Consider Hadassah's support for immigration — our policy statements date back to 1946. Or how in 2000, more than 500 Hadassah members celebrated Mother’s Day by joining the Million Mom March for gun reform in Washington, DC.

If you’ve ever been to a Hadassah meeting, you know the adage about "two Jews, three opinions" holds more than a little truth. Almost every day as I talk to members in my volunteer leadership role as Coordinator of Education and Advocacy, I hear firsthand just how passionate they are, whether they’re sharing pride or asking why we're advocating on one issue and not another. As complicated as that question may seem, there’s a simple — and important — answer.

Defining Our Issues: Policy Statements
Like other nonprofits, Hadassah has a formal process for determining our official positions: our policy statements, each approved by our National Assembly and delegates from around the country. Since 1912, three guiding principles have shaped this process:

That sentiment felt palpable when we passed our policy statement on racial justice in 2017, and during this year's votes on COVID-19, US-Israel medical partnerships, and reaffirming Hadassah's commitment — as we mark 100 years of women’s suffrage — to civic engagement.

Passionate, Not Partisan
As a 501(c)(3) nonprofit organization, Hadassah is just one of America’s 1.3 million charitable nonprofits. Our positions are nonpartisan, and they stay constant, regardless of who assumes political office.

Often I’m asked about our positions on Israel, posed by hawks, doves and many in between. Hadassah supports the democratically elected government of Israel, which means our organization rarely speaks out on Israeli politics, as passionately as many of us may feel as individuals, unless it impacts Americans. Instead, we focus on advancing strong US-Israel relations and shining a spotlight on the important role women play, including at the Hadassah Medical Organization — though the Knesset still has a long way to go before it has as many women as men among its ranks..

Yet I'm always proud of Israel and our work there building bridges to peace, focusing on our patients, regardless of race or religion. Knowing Jewish history, how can we not support everyone? How can we not take issue when there is discrimination? For me, that’s a part of my Zionism. And it’s one reason I’m proud Hadassah fought tooth and nail for a decade and a half to reverse the 1975 UN resolution equating Zionism with racism..

Fighting alongside us was Bella Abzug, ardent Zionist, Hadassah member and tireless advocate for the reversal of that resolution. "In the face of so much pain, I remain an incurable optimist," Bella Abzug once said. "I am fueled by the passion of the women I have been privileged to meet and work with, buoyed by their hope for peace, justice and democracy.".

On this point, I couldn’t agree with her more. Hadassah stands for women. My own daughter, Evan, is a doctor today — more than half of her graduating class from medical school were women. Yet discrimination and inequity continue. As a women's organization, it's critical for us to speak out. Who would speak out if not a women’s organization?.

As we head into election season, we of course cannot and will not endorse any candidates. But we can still encourage everyone who crosses our paths to vote, and we can speak out loudly and clearly about the issues that unite us.

Hadassah's National Board determines the public policy positions of Hadassah that will be promoted and advocated by the Advocacy Team on behalf of the organization. These positions are expressed in the form of public policy statements, which are debated and approved by Hadassah's National Board (and, at times, the delegates to the annual National Business Meeting). Suggestions for new policy statements, reaffirmations, and amendments may be submitted at any time by Hadassah volunteers, members and supporters to the National Advocacy Team by email to advocacy@hadassah.org.

The following is the process by which Hadassah develops and adopts Hadassah Policy Statements: