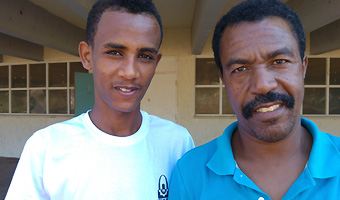 Louis says he feared nothing more than spending endless years as a boy soldier in the Eritrean army/national service, where conscription can go on to age 50. Desperate, he embarked on a treacherous journey, not sure where he'd end up.

While the moral debate rages over the limits of the responsibility of strong, free countries like ours to take immigrants, I am having lunch with one such refuge. We're in the cafeteria of Hadassah-Neurim, a youth Aliyah village near Netanya. School has just started, and around us teens, like Louis are wearing jeans and t-shirts with the school logo. He sprints to the communal kitchen to get us additional water and glasses.

Leaving home is dangerous but it's not rare in Eritrea, where an estimated five thousand citizens stealthily leave their country every month. If you're caught you might be shot or tortured. Such is life in the State of Eritrea, a country of six million-half Christian, half Moslem – in the Horn of Africa, bordered by Sudan to the west and Ethiopia in the south, with a long coastline along the Red Sea, the Greek for which is the source of the country's name. The United Nations forged the federation between Ethiopia and Eritrea in December 1950. A 30-year war of liberation began. The same UN supervised a referendum in which the Eritrean people overwhelmingly voted for independence, declared in 1993. That didn't turn out to be a great idea. A party called the Eritrean People's Liberation Front seized power, established a one-party state, banned political activity and conscripted citizens to work for them. Defiance is crushed with imprisonment, reputedly under ground, and torture.

The second of seven children—his older sister has moved to Ethiopia and married—he dodged the armed border guards and made his way to the UN (again!) compound in Sudan. There are multiple stories of kidnapping there, but he survived and crossed the shoot-on-sight guards to enter Egypt and the used the money gathered by his family to pay the notorious smuggling gangs who guide Eritreans through Sinai and into Israel. "I was terrified all of the time but knew I didn't want to turn back," he said.

The word among the refugees was that the Israeli guards don't shoot, so he was relieved to be captured by the Israelis and sent to detention in the Negev facility Holot. The doctors who examined him confirmed that he was only a child of 14.

Over 40,000 immigrants from Eritrea have entered Israel this way.

He was transferred to a new detention center in Hadera. That's where he met Natan Biton the Director of the Hadassah-Neurim. "I received a call from a representative of the Ministry of Education to ask me if I would be willing to take in refugee children from Eritrea. I told him I would be honored to."

Biton has a strong sentimental side about absorbing immigrants, nurtured by a childhood growing up in Israel, one of of six children of immigrants from Morocco. His parents couldn't read or speak Hebrew, and he and his siblings—all of whom like him have graduate degrees—made their way through the no-frills school system at Israel's periphery. The Youth Aliya village he runs has 400 residential students and 100 commuters from Netanya. It's first name was Ben Shemen 2, because the veteran children's village near Ben Gurion airport was evacuated at night to abandoned British barracks just north of Netanya in the War of Independence. (The emotional evacuation scene in movie Exodus is based on this) The teens there had fled Nazi Germany; the villages. After World War II, the village became home to young Holocaust survivors. Later, they were opened to immigrants from Morocco, Romania, Iraq and almost every other immigrant group as well as sabra children from impoverished and dysfunctional homes. In recent decades, most immigrants have come from the former Soviet Union and Ethiopia. On the advice of social workers and counselors, native-born Ethiopian children often elect to study in these residential settings because of the challenging socioeconomic situations at home.

Biton, no surprise here, comes down on the side of stretching our resources to absorb as many teens as possible. "I always think that we after World War II we had nothing and needed to be taken in," he says.

Another core value of Biton's is that diversity produces strength of character. Nearly every ethnic group is represented in his student body, including Arabs. "I wish we had a teen in a wheelchair, or a blind teen so that our students would learn to live with disabilities," he says. He'd be willing to take in Syrian teens. "We took in Lebanese citizens and there's no difference," he says.

Louis is one of twelve Eriterean teens who have studied at Hadassah-Neurim so far. "Every one of the girls had been sexual on the way," says Biton, who made sure they received medical and psychological counseling.

Biton remembers with fondness the day he met Louis, a skinny kid with big eyes and a charming smile. He brought along a staff member who speaks Tigrit. Louis said he'd be glad to go to Neurim.

"The kids were wearing rags," said Biton. "We stopped at a second-hand store on the way home and filled suitcases with jeans and tee-shirts."

Typically, the villages have been supported by Israel in partnership with Diaspora Jews who believe in child rescue.

Of course, the Youth Aliyah village is experienced and well-prepared for immigrant absorption. In the nearly two years Louis has been at Hadassah-Neurim he has learned Hebrew and received tutoring at school. He has a lot to catch up, even in a setting that is geared for children who need remedial work because of disrupted childhoods.

"I miss my family, but have no desire to return until the situation in Eritrea changes," he says.

Biton's key assistant in absorbing the Eritrean youth is athletic coach Alemayhu Faloro. A coach to champions in Ethiopia, Falero met many Israeli athletes who came to train with him in Ethiopia. Through them he fell in love with the country, and moved here. He worked first Gush Etzion and the Hebrew University, he has found his life challenge with the children at Hadassah-Neurim, turning them into champion athletes. Along the way, he converted from Christianity to Judaism.

Faloro believed that Louis could run. "Running teaches you the value of hard work and that there are no shortcuts."

Soon he was winning races. Today he is Israel's top top runner in his age group. As soon as his permanent status as a refugee is straightened out and he can get his Israeli passport, he'll be representing us abroad, says Falaro. Louis smiles when the coach describes his training regime. "He can still outrun us all," says Louis.

Falaro is a philosopher, too. "The missing factor for many athletes is courage," he says. Louis has lots of that. He's so talented that if he continues to work hard he can go all the way to represent us in the Olympics."