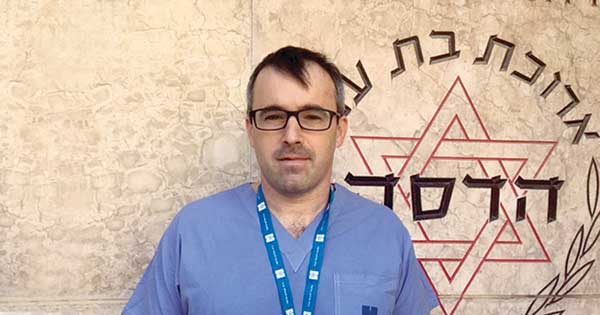 The back pain was so severe that Lilyah Altschul, 73, was almost paralyzed. Several Israeli hospitals refused to operate, but doctors at Hadassah Hospital Ein Kerem performed a complicated surgery under only local anesthesia. Senior spine surgeon Dr. Josh Schroeder restored her mobility in what daughter Diana described as “a miracle.“

For years, Diana accompanied her mom as she visited many consultants. “One doctor after another gave up on her,” she reported. The pain was constant and intolerable. No number of pills would help.

“At this point we met Dr. Schroeder,” Diana recalls. “He wasn’t afraid and wouldn’t give up. He was so convinced in his ability and that of the surgical team at Hadassah. He infected us with that assuredness. We felt that we’d finally found a doctor who saw her, listened and understood her distress. We opted for him to operate with our eyes wide open.”

Altschul had a serious infection that brought her to the brink of paralysis, according to Dr. Schroeder. “She arrived in a prone position and was only able to move her head,” he says. “There was incredible pressure on the nerve sac, which surrounds the spinal column. It could have caused permanent paralysis.”

Altschul had numerous health problems so Dr. Schroeder determined putting her under full anesthesia was extremely risky. He and his colleagues have perfected a technique for operating while patients are still awake but under local anesthesia and sedation.

The orthopedic surgery was carried out by Dr. Schroeder alongside Brain Catheterization Unit Director Prof. Jose Cohen and consultant anesthesiologist Dr. Rawhi Hashem. The team used advanced equipment provided by USAID/ASHA. While Dr. Schroeder placed a series of rods and screws in Altschul’s back, Prof. Cohen monitored her condition with some of the world’s most advanced technologies in the field.

Altschul’s children, Diana and Alexander, remained by her side as she took her first post-surgery steps.

“The operation was successful,” says Diana. “There’s improvement day by day. She’s already walking properly on a treadmill. She’s smiling again after all that suffering.

“All I have left to say is a huge thank you to Dr. Schroeder, Prof. Cohen, their staffs and the orthopedics team who looked after mom following the surgery. My mother, Alexander and I will always remember you.”