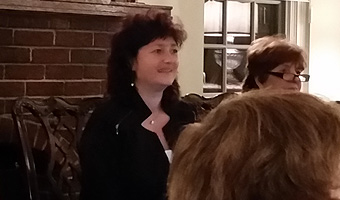 When Ronit Meidan, Head Nurse in the pain relief unit at Hadassah Hospital-Ein Kerem, looks out of her living room window in Pisgat Zeev, her view is of the Arab neighborhood of Beit Hanina. At Hadassah, she is part of a mixed professional team of Jews and Arabs, who daily help to alleviate the pain of their Jewish and Arab patients. Sometimes, their patients are terror victims; sometimes, they are the terrorists.

“One terrorist was badly injured when the gas balloons she was transporting to an attack blew up,” relates Mrs. Meidan. “When I’m outside the door,” she says, “I have to overcome my feelings, but the minute I walk in, I see a woman in pain--a mother--who needs my help. She’s a patient like any other.”

Mrs. Meidan, who studied nursing at Hadassah, has worked there for 30 years. She recalls the October day she took off from work to prepare for a family wedding. From the days she worked at Hadassah Hospital-Mount Scopus, she still had a favorite hairdresser in the Ammunition Hill neighborhood. When she set out to have her hair cut and colored, however, she found she could not get there, because a terrorist attack was taking place.

“I turned around and told myself that I’d simply go to the hairdresser in my neighborhood,” she recalls. “While I was waiting for the color to take, I heard sirens once again. I thought I must be imagining something.”

Yet, four shops away, two teenagers from Beit Hanina had stabbed a 13-year-old boy from Pisgat Zeev. In grave condition, the boy who was stabbed was taken to Hadassah’s Mount Scopus hospital, and the stabber to Hadassah-Ein Kerem. “The hairdresser (an Arab woman) and I commiserated with each other,” Ms. Meidan says, “both of us condemning the violence which threatens our co-existence.”

Mrs. Meidan had immigrated to Israel as a child from France through the Youth Aliyah program. She had lived at the Goldstein Youth Village sponsored by Hadassah. Mrs. Meidan has four children, one a paratrooper in the Israel Defense Forces.

At the end of November, she and three of her nurse colleagues traveled to Massachusetts to shadow pain specialists at Massachusetts General Hospital, through a program of Israel’s Ministry of Health. The Ministry aims to establish a pain specialization in Israeli hospitals.

“My job is to reduce human suffering,” Mrs. Meidan says. ”As a Hadassah nurse, I’m committed to doing that in every way possible. I'm looking forward to observing how my American counterparts do their jobs and bringing back ideas to Israel."