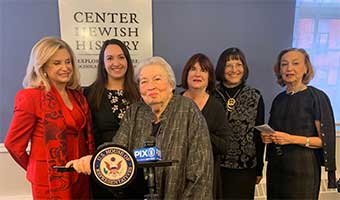 UPDATE: Read about Hadassah and this important legislation in the Jewish Week.

A Call to Action at the Center for Jewish History
Leaders of the Jewish community joined Rep. Carolyn B. Maloney and Hadassah CEO/Executive Director Janice Weinman at a press conference for the reintroduction of the Never Again Education Act. This bill, introduced by Maloney and Rep. Elise Stefanik, would expand Holocaust and anti-hate education around the country. As anti-Semitic threats and attacks rise nationally, Hadassah is helping to fight hate as the NGO convener of this legislation.

"We are at a dangerous moment in time. Anti-Semitism is on the rise around the world and here at home, and the memory of the Holocaust is fading for large numbers of our youth," said Congresswoman Maloney, after welcoming representatives from 12 Jewish organizations. "It is simply not enough to condemn hateful, violent attacks to the Jewish community — we must take steps to educate people about the horrors of the Holocaust and the consequences of intolerance. I am proud to reintroduce the Never Again Education Act, so that we can be vigilant in the fight against hatred and give teachers across the United States the resources and training they need to teach our children the important lessons of the Holocaust," she said at the February 4 press conference, held at the Center for Jewish History in Manhattan.

CEO/Executive Director Janice Weinman detailed Hadassah's unwavering support for the bill, saying, "Hadassah, the Women's Zionist Organization of America is proud to serve as the non-governmental organization (NGO) convener of the bill, mobilizing our 300,000 members and supporters as well as other non-profit organizations around the country to garner support for it. Our New York and Washington, DC, advocacy teams are working closely with the Congresswomen and their staff, and we will continue to take action until we see the passage of this important legislation."

The emotion in the room was palpable. Each person who spoke — including several Holocaust survivors — shared personal remarks that brought to life some of the many reasons why Hadassah and others are working tirelessly to see the passage of the bill, speaking out and spreading the word.

Holocaust survivor Ruth Zimbler, a Hadassah member and Chair of Donor Services for Planned Giving, closed the conference with the two thoughts she leaves students with when sharing her story in schools around the country: "Number 1: Always be an upstander, not a bystander. And Number 2: As the saying goes, 'May peace prevail on earth, and let it begin with me.'"