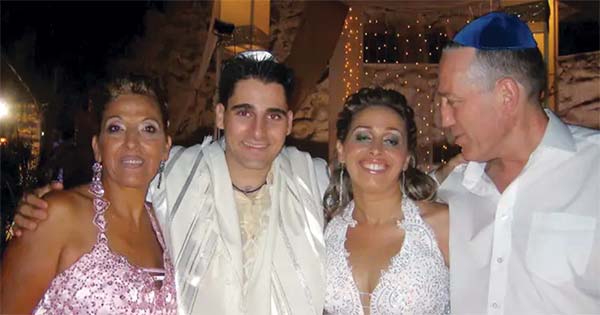 Photo caption: Rachel Ohana and Prof. Avi Rivkind stand on either side of the happy couple at Shimon and Avia’s wedding. (photo credit: Courtesy Ohana family)

Two decades ago, Shimon Ohana, then an 18-year-old border policemen, was sent to protect the residents of Gillo, who had become the targets of sharpshooters from the Palestinian town of Beit Jala. Seeing shots fired at a woman, Shimon heroically intercepted them with his own body. A medic who was called to the scene was unable to revive him.

Shimon, who had been covered with a body bag, arrived at Hadassah with two holes in his heart and two in his stomach. Atag read, "Dead on arrival."

Despite Shimon’s lack of a pulse and a 10th of one percent chance of recovery, Prof. Rivkind believed he could save him. And, indeed, he brought Shimon back to life. After 17 days in a coma, Shimon woke up. With the help of his mother’s homemade Moroccan meatballs and extensive physical, occupational and cognitive therapy, Shimon recovered.

He later married and he and his wife, Avia, had a son, whom they named Uri Meir. Recently, the family celebrated Uri’s bar mitzvah. Read the full story of this Hadassah miracle in Barbara Sofer’s October 24 Jerusalem Post column.