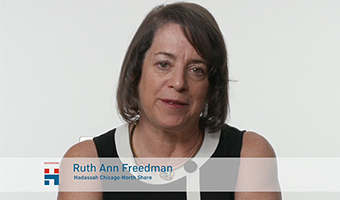 As Rosh Hashanah approaches, suddenly it seems like pomegranates are everywhere, the seeds symbolizing the 613 mitzvot and fertility.

Yet the commandment “to be fruitful and multiply” (Genesis 1:28) is far easier for some families than others.

When I was 18 years old, I was diagnosed with polycystic ovarian syndrome. I knew then that I would be challenged to get pregnant, no matter what age I decided to begin to try. Twenty years later, I met and married Dan Wander. We began our fertility treatments shortly after our honeymoon.

After years of treatment, I had my first IVF on the second day of Rosh Hashanah, 1999.

The realities and prevalence of infertility are far from new, confronted by the biblical matriarchs, from Sarah — who we encounter in the Torah reading for the first day of Rosh Hashanah — to Rachel and Hannah.

Dan and I were deeply moved as we read those biblical passages in the waiting room that day. As alone as many feel when coping with infertility, the reality is that 11 percent of women have trouble getting pregnant or sustaining a pregnancy. Nine percent of men, and one in eight couples struggle with infertility. For Jews, the numbers are higher with one in six couples diagnosed, according to the Jewish Fertility Foundation. For many, it’s heartbreaking. For those able to undergo fertility treatment, it’s physically and emotionally exhausting, not to mention intensely stressful.

The known causes of infertility range from genetics to age to medical conditions like endometriosis, male vascular problems, cystic fibrosis, and — for me — polycystic ovarian syndrome. For some, infertility follows cancer treatments or injuries, and for many the cause is unknown.

In November 1999, I began my final set of fertility treatments while on a Hadassah Young Women’s Mission to Israel. My nurse friends on that mission did more than support me — they helped with injections! Barbara “BG” Goldstein, Deputy Director of the Hadassah Office in Israel, took a few of us to the Tomb of Rachel in Bethlehem. Leaving my handwritten note and tying the symbolic red ribbon onto my wrist was a powerful, spiritual experience, one of the most meaningful in my life.

Two weeks later, I had my 10th fertility procedure, my second round of IVF. Our seven-week ultrasound showed identical twins sharing one placenta, a baby from IVF and a baby from God. On August 7, 2000, my daughters were born. We chose the names Rachel and Hannah to link them both to strong Jewish heroines whose stories would become theirs.

Today, they are passionate Zionists. After spending the summer in Israel, they’re back in the United States for their sophomore year at college.

So many women and men are coming out of the shadows, sharing their experiences, good and bad. After I shared mine this summer in New York at Hadassah’s National Assembly meeting, several women reached out to talk about their struggles and miscarriages, the children they were unable to have and those they felt blessed to have today.

At the time of my IVF, I talked openly about what I was going through, which I think helped others give me the support I needed. Today, I share my story with the hope that helping others struggling with fertility — and that more and more people will feel empowered to share their stories, too.

Dan and I, we were extremely lucky that we had access to insurance coverage for IVF. Although 18 months of treatments weren’t easy, they weren’t a financial burden for us like they are for so many.

This piece was also published on The Forward's Sisterhood blog on September 26.