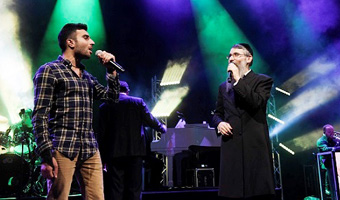 Hadassah International Israel (HII) drew over 1200 men and women to a concert at Tel Aviv University, targeting the funds raised for renovation of the rehabilitation facilities at Hadassah Hospital Mount Scopus.

Entitled “To Our Soldiers with Love,” the concert featured the celebrated Hassidic singer, Avraham Fried, who flew in from New York for the event. Creating an ambiance of Melave Malke, the post-Sabbath ritual of escorting out the “Sabbath Bride” with song, Mr. Fried engaged the largely Orthodox audience in community singing.

With the Mount Scopus rehabilitation unit renowned for the comprehensive, high-quality therapy it provides to injured soldiers and victims of terror, Fried repeatedly thanked Hadassah’s medical and nursing staff for their sacred work. His songs included references to Hadassah, as well as passages from the Maimonides Oath for the Physician.

“The eternal providence has appointed me to watch over the life and health of Thy creatures. May the love for my art actuate me at all time; may neither avarice nor miserliness, nor thirst for glory or for a great reputation engage my mind; for the enemies of truth and philanthropy could easily deceive me and make me forgetful of my lofty aim of doing good to Thy children May I never see in the patient anything but a fellow creature in pain. Grant me the strength, time and opportunity always to correct what I have acquired, always to extend its domain; for knowledge is immense and the spirit of man can extend indefinitely to enrich itself daily with new requirements. Today he can discover his errors of yesterday and tomorrow he can obtain a new light on what he thinks himself sure of today. Oh, God, Thou has appointed me to watch over the life and death of Thy creatures; here am I ready for my vocation and now I turn unto my calling.”

Mr. Fried and his ensemble were joined on stage by up-and-coming singing star Ishai Rebo, who also blessed the life-saving treatment at Hadassah. In addition, Hadassah patient Hayim Levtov, who was severely wounded during the Gaza military operation entitled “Protective Edge,” joined Fried in singing his hit song, “My Small Leaf.” The emotional ballad tells the story of a wizened tree that teaches the confident young leaves about the vicissitudes of life.

Among the evening’s speakers were HII Board Chair and former Speaker of the Knesset Dalia Itzik, Chief Ashkenazi Rabbi David Lau, and Minister of Housing Yoav Gallant. “In my more than 30 years as an officer in the Israel Defense Forces,” commented Mr. Gallant, “I thought I knew everything you could know about soldiers, but I was wrong. Since meeting many of those injured in battle who carry with them the price of our freedom, I have come to appreciate the hard work of rehabilitation.”

Reflecting on the evening, HII Director Meir Mark noted: “This was the first time ever that such a large religious crowd expressed financial support for Hadassah Hospital.”